Roth IRA Vs. Traditional IRA: Which Is Better For You?

Roth IRA vs. traditional IRA: which is better for you? What’s the difference between them?

The short answer is that you should use the one that leaves you more money after you’ve paid taxes.

That generally boils down to one factor: if you expect your tax rate to rise when you start to take withdrawals — which, odds are, is in retirement — then a Roth IRA is typically better for you.

Here’s another way of looking at that: Generally, the younger you are now, the more likely it is that your tax rate will be higher in retirement, years or decades in the future.

Salaries tend to be lower earlier in life. Typically, even your retirement income will be higher than your salary early in your career, says Maria Bruno, head of the U.S. wealth planning research team at fund giant Vanguard.

Think about it. Let’s say your salary is $70,000 this year. This year that puts you into the 22% federal tax bracket.

But what happens when you are, say, 70 years old and retired? For the sake of comparison and simplicity, let’s say tax rates and brackets stay the same, even though they are highly likely to rise in the future.

Suppose your annual income is $165,000. Let’s also suppose that your Social Security benefit is today’s maximum, $46,740. So you probably get the balance of your annual retirement income, $118,260, from your IRA. And let’s say you’ve already rolled over your 401(k) savings into an IRA.

Here’s another benefit of using a Roth IRA instead of a traditional IRA. It taxes your savings earlier during your life span. That’s when your savings balance is smaller.

Later in life, when you begin withdrawals from the Roth IRA, your balance has had a chance to grow larger by compounding. All the while, it is growing without being subject to income tax.

With that said, with a Roth IRA you’re coughing up the cash to pay taxes now, rather than years from now using a traditional IRA.

Perhaps all of this would be easier to keep straight if you received a brief refresher on the difference between how Roth and traditional retirement accounts work. Here it is.

With a Roth IRA, you contribute money left over after you’ve paid taxes. That’s why they’re called after-tax contributions. And your contributions do not get a tax deduction.

Once you’ve contributed to a Roth IRA, earnings on investments inside your account grow without being taxed. That’s the same way earnings inside a traditional IRA are treated.

But the juiciest difference between Roth and traditional IRAs is that withdrawals from a Roth IRA are free from income tax.

In contrast, withdrawals from a traditional IRA are taxable.

Contributions to traditional IRAs are made with money that is pretax — that is, it is excluded from your taxable income that year. But the free ride ends years later, presumably in retirement, when you take the money out. That’s when it is taxed as ordinary income.

Today, tax rates on ordinary income are as high as 37%.

When Are Withdrawals From Roth Retirement Accounts Taxable?

Contributions to a Roth IRA can always be withdrawn tax-free.

As for earnings, they are tax-free too once you and your account meet certain conditions.

First, earnings withdrawals are tax-free once your Roth IRA is at least five years old and you have reached age 59-1/2.

If the account is at least five years old but the owner is under age 59-1/2, earnings withdrawals are still tax-free if the account owner is completely and permanently disabled or deceased (in which case the money goes to the deceased owner’s beneficiary).

There are additional exemptions to taxation if the account is five years or older but you’re under age 59-1/2. One is that you’re allowed to use up to $10,000 of withdrawn earnings to buy a first home. Other exemptions include paying for postsecondary education expenses. Also among the exemptions: eligible unreimbursed medical expenses.

Roth Vs. Traditional IRA: How To Choose?

Another key difference between a Roth IRA and a traditional IRA involves the rules governing required minimum distributions (RMDs).

With a traditional IRA, you must start taking RMDs by April 1 of the year after you turn age 72.

A Roth IRA is exempt from RMDs.

What If You Inherit A Roth IRA?

If you inherit a traditional IRA, you must start to take withdrawals over your lifetime or within five years after the original account holder passed away, regardless of your age.

There’s one more advantage of a Roth IRA vs. a traditional IRA.

You may want to use a Roth account instead of a traditional one even if you think your tax rate will be the same in retirement. “RMDs can change the equation,” Bruno said. “The RMD could bump someone into a higher tax bracket. That could cause taxation of Social Security benefits (that otherwise would not be subject to taxation). It could also lead to other taxes.”

Bruno’s solution: even if you think you might be better off with a traditional account, consider using a Roth account instead. “By using tax diversification, you may avoid unintended tax consequences,” Bruno said.

So, experts concur that if you’re a young worker in the early part of your career, you’re almost certainly better of with a Roth IRA or Roth 401(k).

How young? How many years until retirement?

Most future retirees should use Roths because tax rates are bound to climb, says Ed Slott, founder of IRAHelp.com.

“That said, If I had to put an age on it, I would say anyone under age 50 should be going all Roth,” Slott added. “The younger you are — the more years away from retirement — the more likely it is that your tax rates will be raised when you begin withdrawing in your retirement years.”

Will Congress kill some advantages of Roth IRAs in order to pay for various spending bills?

“Congress could make other changes for Roth IRAs and traditional IRAs,” Slott said. “When I conduct seminars around the country, that’s the No. 1 question that audiences ask me: ‘Can I trust the government not to change the rules?’ ”

Slott added, “There’s no way to know. The problem is the uncertainty that creates. It creates uncertainty for decisions that people have to make about financing their retirements for decades, decades in the future. That’s a big problem.” 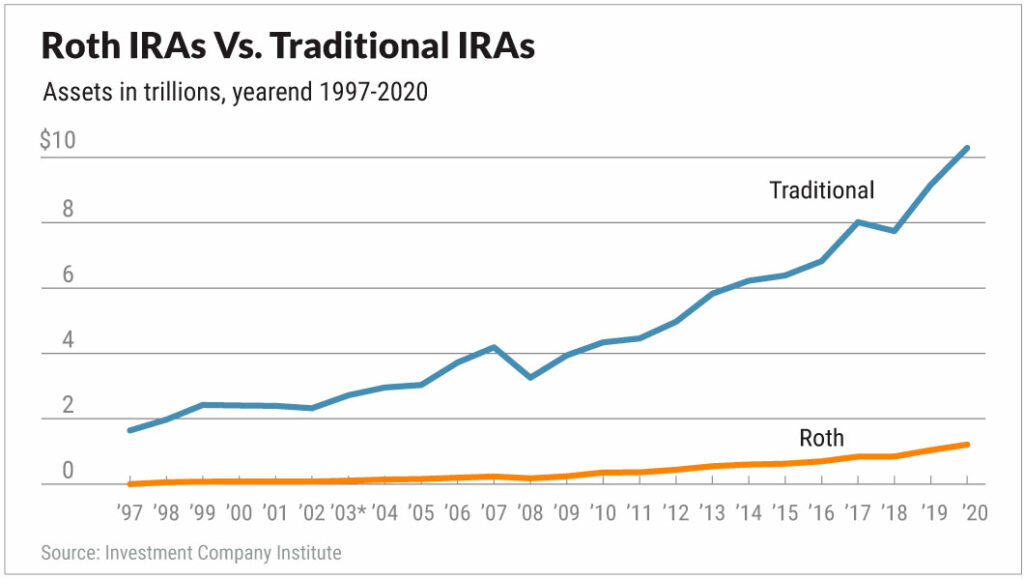 A version of this column was originally published in the July 27, 2018, edition of IBD.