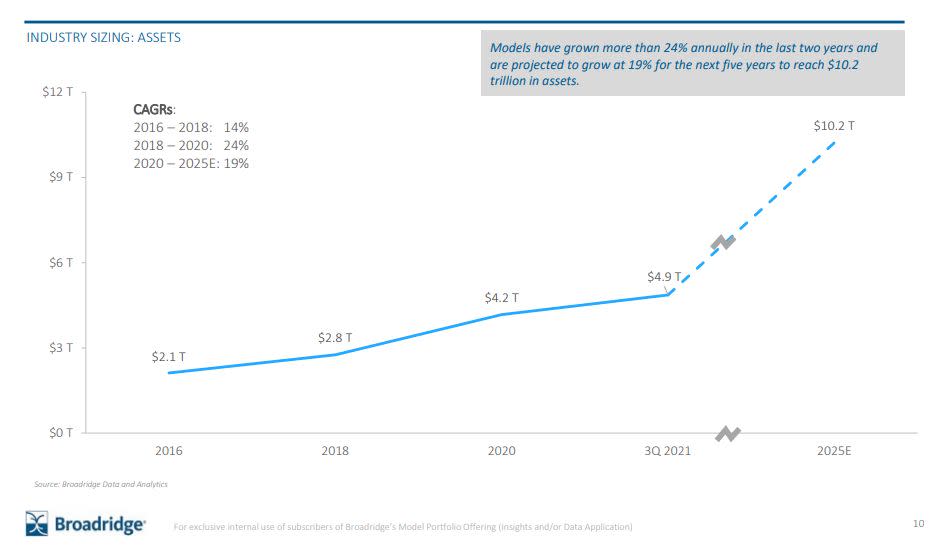 (Bloomberg) — A booming $4.9 trillion branch of the U.S. asset management industry is funneling investor cash into funds that are pricier and worse-performing than alternatives, new research claims.

So-called model portfolios — off-the-shelf investment strategies often comprising bundles of ETFs — are ridden with conflicts of interest that undermine one of the hottest and most opaque businesses on Wall Street, a trio of academics argues.

These allocation blueprints, usually created by asset managers and deployed by financial advisers, have exploded in popularity in recent years as easy, one-stop solutions for investors of all stripes.

Yet the firms designing them tend to favor their own exchange-traded funds, Jonathan Brogaard, Nataliya Gerasimova and Ying Liu wrote. And advisers are steering client money to them with seemingly little regard to what that means for performance.

“These affiliated ETFs, on average, have lower past returns and higher fees than unaffiliated funds,” the team said. “We also do not find evidence that the affiliated ETFs provide superior performance after they are recommended.”

These are big claims against a business with ever-growing clout over the billions gushing in and out of ETFs every day. Model portfolio assets have more than doubled over the last five years and Broadridge Financial Solutions projects they can double again to $10 trillion by 2025.

Many providers of models are asset managers, who stand to benefit from new cash flowing to their funds. Meanwhile, financial advisers have embraced them as a way to outsource allocation decisions so more time can be spent attracting and serving clients.

Yet investors are hardly innocent victims. Many appear to be blindly following model recommendations and taking little notice of the fees and performance, the paper said.

“Investors who chase the recommendations also behave differently, as they pay less attention to both the price and the performance of the ETFs,” the study found.

Brogaard at the University of Utah, Gerasimova at the Norwegian School of Economics and Liu at the Shanghai University of Finance and Economics tracked the effects of model changes in Morningstar data between 2010 and 2020.

They found that an ETF receives 1.1 percentage point more in flows per month after a recommendation, or inclusion in a model. Demand for the featured products also then becomes less sensitive to fees and past performance.

ETFs owned by the same parent company are a little more than three-times more likely to be added to a model — despite fees that are on average six basis points higher and year-to-date returns 67 basis points lower compared to unaffiliated funds.

The findings are the latest iteration of longstanding worries that major Wall Street firms tend to use one business line to boost another, regardless of cost to the end-investor. Previous studies have found that investing platforms and retirement-plan providers, for instance, favor funds of the same brand.

Anecdotal evidence has been growing for some time over the impact of model portfolios. A number of outsize ETF flows in recent years have been connected to adjustments in large models.

For example, a tweak to one strategy by BlackRock Inc. in July drew a record daily inflow to its ETF of inflation-hedged bonds. The world’s largest asset manager has also added its main ESG fund to its model portfolios, helping fuel $18 billion of inflows in two years.

“As a fiduciary, BlackRock provides model portfolios for advisors designed to meet clients’ investment objectives while controlling for risk in an efficient, cost-effective manner,” a spokesperson said by email. “Our platform offers advisors choice from a wide range of portfolio options which may include iShares ETFs, BlackRock mutual funds and ETFs and funds from third party managers.”

The new paper, titled “Advising the Advisors: Evidence from ETFs,” is among the first to document the sway of these portfolios.

“Despite the increasing number of model recommendations, little is known about how they influence the investment choices of financial advisors,” the academics wrote. “We aim to add to the industry and regulatory debate about the opacity of the model portfolios.”