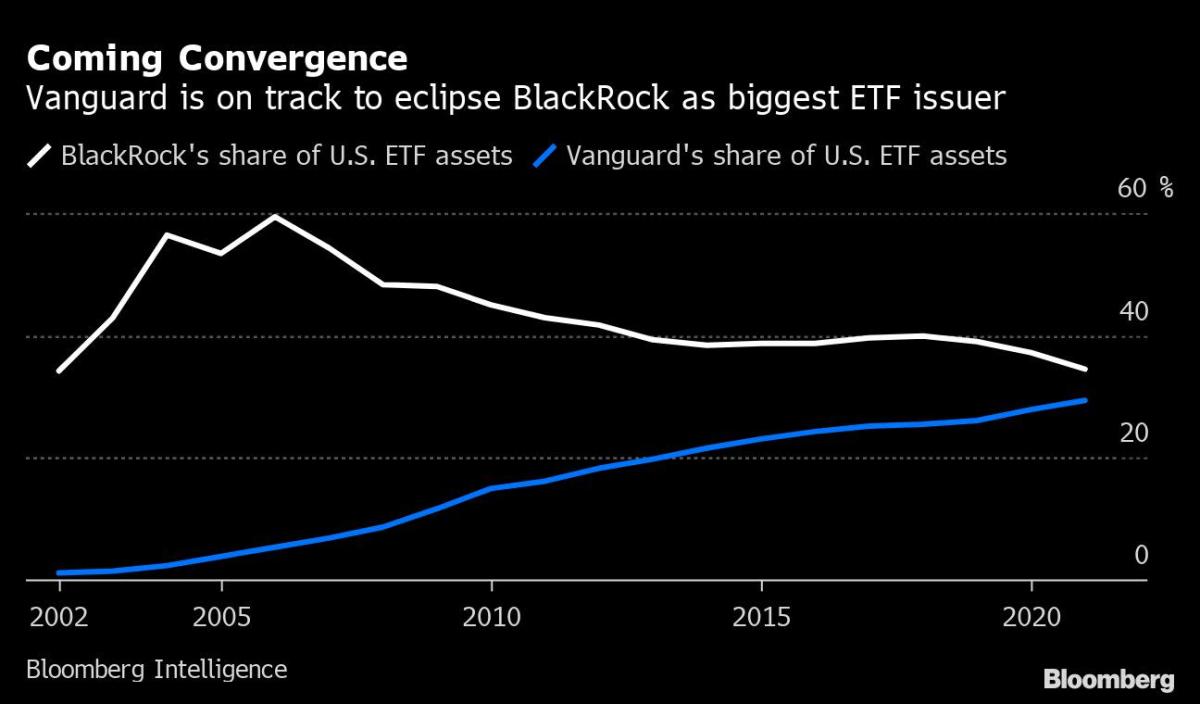 (Bloomberg) — Every year over the past two decades, in the good times and the bad, there’s been one sure-fire trend in Wall Street money management: Vanguard tightens its grip on the ETF market.

But now the John Bogle-founded giant is squeezing the $6.8 trillion industry harder than ever, by ramping up the fee war across a line-up of funds that is already raking in most of the billions flowing into the market.

Late last month, almost unnoticed, Vanguard said it had slashed charges on another 10 exchange-traded funds. That’s in a suite of 82 U.S.-listed ETFs, which have already absorbed about $58 billion this year — more than all 2,817 competing funds combined.

Coming on top of the firm’s record-shattering $328 billion haul in 2021, those flows put Vanguard on course to surpass Larry Fink’s BlackRock Inc. as the largest ETF manager within the next two years, according to Bloomberg Intelligence — upsetting a world order that has held since 2003.

In the process the Malvern, Pennsylvania-based firm is accelerating the takeover of stock index funds — a development Bogle himself warned created hidden dangers — while driving smaller issuers to offer ever-more niche and risky strategies to survive.

Vanguard “could put up a loss-leader because they have scale in other places,” said Jillian DelSignore, managing director and head of ETFs at FLX Distribution, a fintech platform for the asset-management industry. “If you are a one or two or even 10 ETF shop and you’re new, you can’t do that. You can’t have margins that look like that.”

Of the record $900 billion poured into the U.S. ETF industry in 2021, roughly one-in-every-three dollars went to Vanguard’s mostly passive, dirt-cheap products. So far this year it’s more than one in two. In January, as rate fears drove an equity selloff, the firm lured $22 billion — dragging the entire ETF industry to net inflows of $17 billion.

Perhaps because it’s not yet the biggest issuer, or because it’s a champion of bringing low-cost investing to the masses, Vanguard’s rampant growth has received limited criticism. But regulators began fretting the size of firms like Vanguard and BlackRock — which manage more than $17 trillion combined — long before the latest growth spurt. Writing in 2018 shortly before his death, Bogle also warned that concentrated index-fund ownership of corporate America may not be in the national interest.

The booming ETF market is feeding this process, with Vanguard increasingly leading the way. The firm’s share of U.S. ETF assets grew to 29.3% last year, the 20th straight year of growth. Industry incumbent BlackRock’s piece of the pie slipped to 34.6% — its third consecutive year of losing ground.

“Our intention is to reduce fees across the board — much like we have in the past,” said Rich Powers, Vanguard’s head of ETF and index product management, in an interview. “How does that manifest in individual products? If you look at our history, we’ve been very consistent in doing that across our ETF lineup.”

The average cost across Vanguard’s 82-fund lineup — which spans both actively and passively managed funds across stocks and fixed income — is only 9 basis points, meaning an investor would pay just $9 to invest $10,000 for a year. Its biggest product, the $278 billion Vanguard Total Stock Market ETF (ticker VTI), charges just 3 basis points. That compares to an average 53 basis points for all U.S. ETFs.

There’s a silver lining, of sorts, for Vanguard’s rivals. The firm accounts for almost 30% of the market by assets and claimed a third of ETF flows last year. But it took just 5% of revenue, according to Bloomberg Intelligence calculations. That shows at least some competitors are generating outsized revenue compared to their market share.

The ongoing Vanguard-driven fee war is driving down the absolute amount issuers can charge for each fund, however, which could be reducing profitability. Meanwhile, the relentless flow into big, established and dirt-cheap passive vehicles makes entering the market a challenging task. Around a quarter of all U.S. products launched in the past two years, but they command just 2.5% of assets.

To survive, new and small issuers are launching active strategies, often chasing risky markets beloved by the day-trading army including Bitcoin and speculative technologies. Last year, for the first-time ever, active ETF launches outnumbered passive, and the trend has continued — of the 29 ETFs that began trading in January, just nine were passive products.

In a world where Vanguard and BlackRock firmly command the bulk of incoming cash to passive products, DelSignore expects indie issuers to dive ever deeper into the world of thematic and active funds.

“The passive ship has largely sailed,” she said.

Key to Vanguard’s flow success is a unique ownership structure that allows the index-fund champion to charge rock-bottom fees. Its ETFs are a share class of its mutual funds, where fund investors elect board members, who are in turn charged within making decisions about the company’s products.

In a typical corporate ownership structure, any extra cash or assets generated by a firm might be returned to shareholders through dividend payments or the like. But for Vanguard, that money is typically funneled toward lowering fees, as there’s no “inherent tension between the owners and investors,” according to Bloomberg Intelligence’s Eric Balchunas.

“The people who own the company are the funds’ investors, ultimately, and their goal is to keep more of the money,” senior ETF analyst Balchunas said. “No one’s copied this structure because there’s no incentive to, but the rest of the industry has to follow it.”

That includes not only new issuers, but big, established players too. In December, Vanguard lowered fees across 17 products including almost a dozen ETFs, many in fixed-income. That countered a move from rival State Street Global Advisors, who went another notch lower in February. Charles Schwab and BlackRock followed suit with similar cuts.

The composition of ETF assets explains why. Nearly 60% of the $6.8 trillion invested in U.S. ETFs is held in funds that charge 10 basis points or less, Bloomberg Intelligence data show.

Powers at Vanguard pushes back on the idea the firm is choking competitors, highlighting that its ETFs represent a tiny fraction of the total.

“It just happens that we have great products that are core products in many portfolios,” he said. “There are countless new issuers in the market. There’s plenty of room for others to bring high-quality, viable products.”