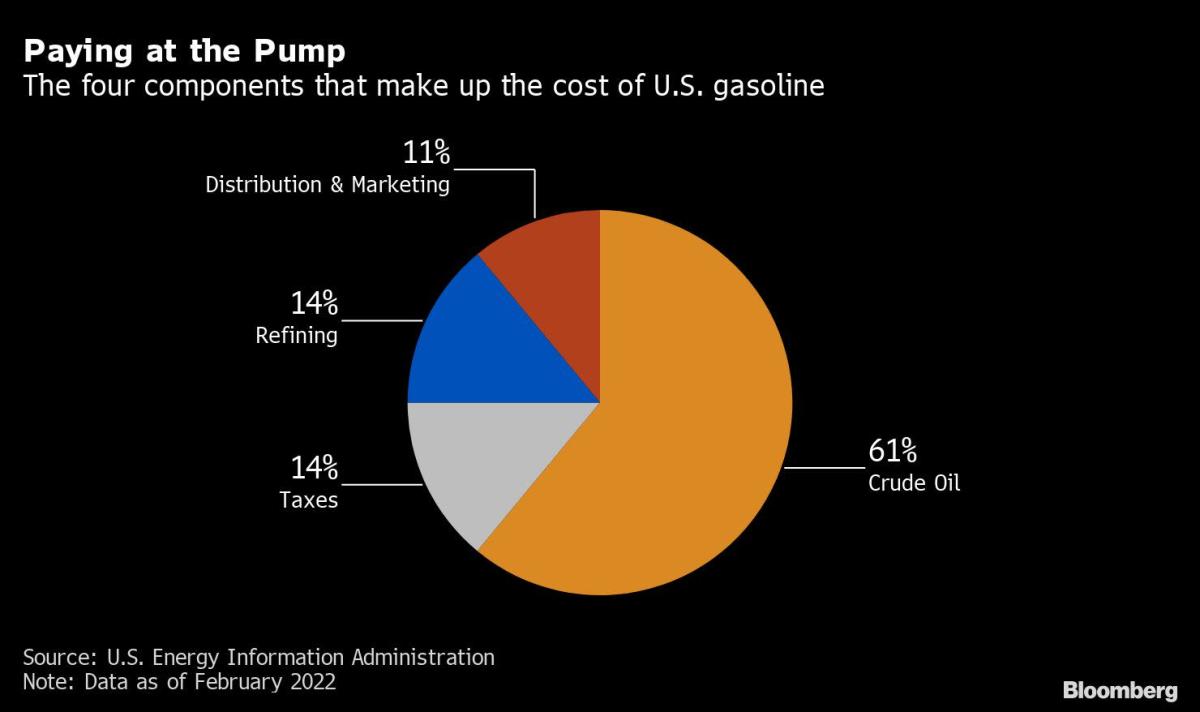 (Bloomberg) — America’s drivers are being squeezed at the pump, and the root cause is surging oil prices. But that’s not the whole story.

Gasoline prices rise and fall with the price of crude, though not always in sync or to the same extent. Add to that: taxes, refining costs, and distribution and marketing costs. On Wednesday, executives from six oil companies will testify before Congress to help provide clarity on the economics of the record-high prices. Here’s our breakdown:

The single-largest contributor to retail gasoline prices is the price of crude oil, the raw material for making fuel. In February, the share of the total stood at 61%, according to U.S. Energy Information Administration data. That compares with 53.6% in 2021 and an average of 54.8% since 2012.

Costs for fuel processing vary depending on refinery configurations, as well as the types of crude being used, gasoline grades being produced and ingredients being added. For example, California requires a cleaner-burning, boutique grade of gasoline that costs more to make. The more sophisticated the refinery, the more capacity it has in turning relatively cheap heavy, sour crude into high-value refined products. Seasonal trends also are a factor, with prices rising during peak demand. Tighter fuel specifications also kick in during warmer months, making the fuel more expensive to produce, further weighing on consumer wallets.

Federal, state and local taxes also weigh on retail gasoline prices. The federal levy is 18.4 cents per gallon, while total state taxes and fees averaged 31.02 cents per gallon as of Jan. 1, according to the EIA. Some states began rolling back gasoline taxes last month, a move the Biden administration is considering at the federal level.

The complexities of making the fuel is one thing; getting it to its final point of consumption is another. From the refineries, gasoline moves through a network of pipeline systems to distribution hubs across the country. From there, trucks transport the fuel to retail outlets.

Before distribution, gasoline may be blended with other products, such as alkylate and butane, depending on economics and local requirements. Ethanol is also added to gasoline at the wholesale level, usually at blends of 10%, but it can be more. The federal government sets a lower limit for ethanol to encourage biofuels blending and an upper limit in the summer to control smog.

Why Aren’t Pump Prices Falling as Fast as They Went Up?

Gasoline retailers may choose to absorb some of the wholesale price increase during price spikes in order to remain competitive. When prices begin to fall, retailers may pass along a smaller percentage of the drop in order to make up for margins they lost during the price gain, according to Jeff Lenard, a spokesperson for NACS, an industry group for convenience and fuel retailing. This is partly why declines in pump prices tend to lag those in crude futures.