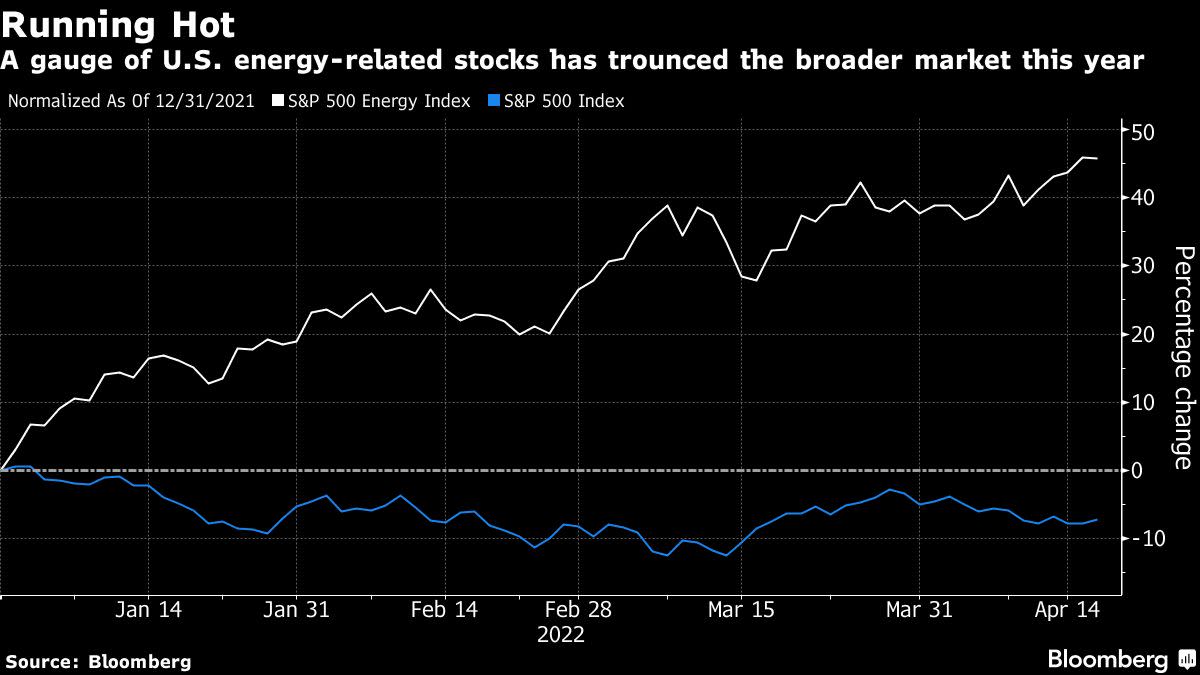 (Bloomberg) — If stock sales are anything to go by, the heads of some of the largest U.S. oil and gas companies may be signaling that this year’s boom in energy shares is limited.

Hess Corp.’s Chief Executive Officer John Hess offloaded $85 million worth of stock in the first quarter, marking his largest quarterly sale since 2011, according to Bloomberg calculations based on regulatory filings. Meanwhile, Marathon Oil Corp. CEO Lee Tillman sold $34.3 million. All told for the period, more U.S. energy executives sold rather than bought stock in their companies than at any time since 2012, according to VerityData, which advises institutional investors.

Insider selling by company executives and directors happens often and the transactions must be registered with the U.S. Securities and Exchange Commission. The sales are typically seen as a bearish sign for stocks because executives have better knowledge of their industry’s cycles than most market participants and can time their actions to harvest the most profit.

The bulk of billionaire Hess’s selling was from a charitable trust of which he is a trustee, according to the filings. The trust was set up by Leon Hess, John’s father and the company’s founder. A spokeswoman for Hess declined to comment.

Tillman’s first-quarter sale includes the money he paid to exercise share options so his net proceeds in the period were about $19 million, a Marathon spokesperson said. He “exceeds his minimum holding requirement as CEO” and “has been both a buyer and seller in the market over time.”

While there were more sellers than a year ago, the total value of shares sold by all energy executives was $1.35 billion in the first quarter, nearly 40% lower than in the same period in 2021 despite stock prices being higher, according to VerityData. Chevron Corp. had the highest selling volume since 2008 and Marathon the most sales since at least 2004. These six CEOs accounted for almost $160 million in sales.

“Historically, oil executives are really good at getting maximum value from selling stock at the right time,” Ben Silverman, head of research at VerityData, said in an interview. “The message is that the cycle here isn’t going to be a long one.”

Despite Hess’s eye-popping divestments in the first quarter, he still has a 9.5% stake in the company when combining direct and shared family holdings, which would amount to about $3.3 billion, making him the third largest shareholder.

Chevron Corp. CEO Mike Wirth sold $12.3 million in the quarter, the bulk of which appear to be from share options granted in 2013 that were due to expire next year, according to a filing. The board’s Management Compensation Committee’s (MCC) pay philosophy is aimed at aligning performance with stockholder returns and balancing short-term and long-term decision making, a company spokesperson said. “As stated in the 2022 proxy statement issued this month, the MCC believes the ownership levels of Chevron’s named executive officers provide adequate focus on the company’s long-term business model.”

Executive windfalls risk political backlash as consumers struggle with cost-of-living amid the highest inflation in decades. Earlier this month, Congressional Democrats accused oil bosses of “profiteering” from the Russian invasion of Ukraine, which has caused crude and U.S. natural gas prices to hit the highest levels since 2008. Industry advocates responded by saying they don’t set global prices, and have spent recent years being told by politicians to rein in production to reduce climate change.

At the House Energy and Commerce Committee on April 6, Lori Trahan, a Democrat from Massachusetts, accused executives of “profiting personally” from stock sales. She highlighted selling by Scott Sheffield, CEO of Pioneer Natural Resources Co., who was at the hearing.

Sheffield responded that the transaction represented his first sale of Pioneer stock in several years. “I still have over 90% of my net worth in Pioneer stock,” he said.

The 21-member S&P 500 Energy Index has climbed 45% this year, compared with a loss of 6.4% for the benchmark S&P 500 Index through Wednesday trading. In the 10 years prior to 2021, energy stocks severely underperformed the broader market.