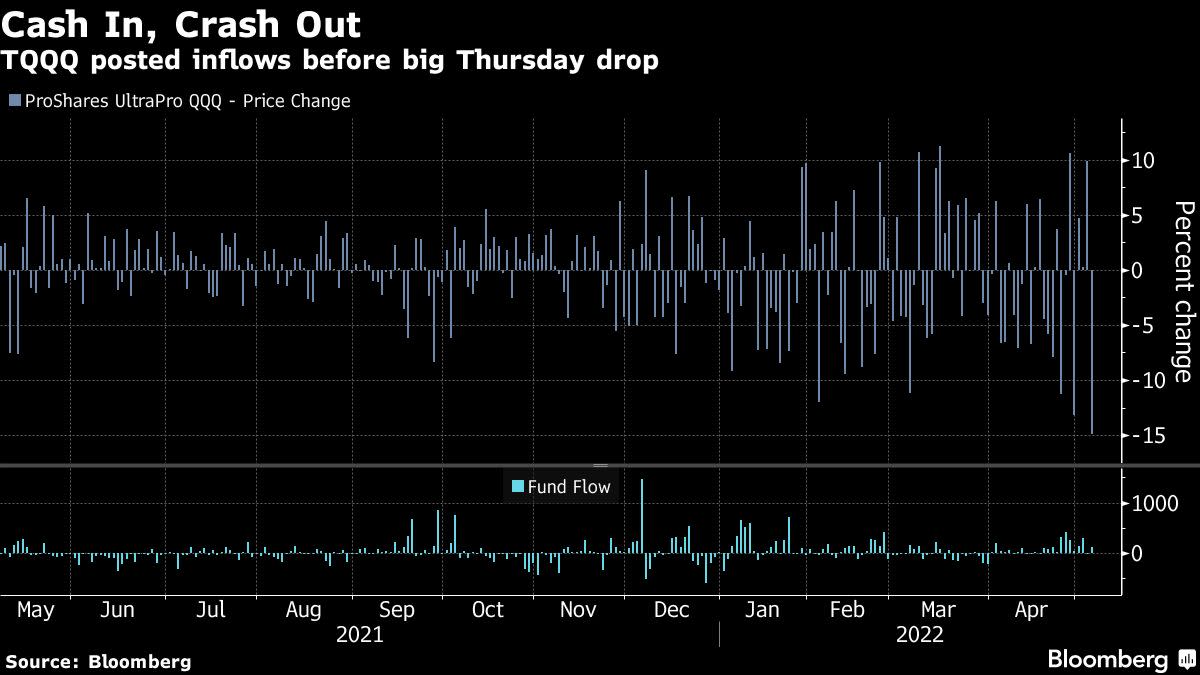 (Bloomberg) — For a measure of just how brutal Thursday’s reversal was in U.S. equities, take a look at where cash was moving in the ETF market earlier in the week.

In the three days through Wednesday, investors added $426 million to the ProShares UltraPro QQQ ETF (ticker TQQQ), a leveraged product that delivers three-times the return of the Nasdaq 100 Index. Caught in the tech stock selloff, it tumbled 15% for both the biggest drop and lowest close since 2020.

In the same time frame almost $1.8 billion poured into the iShares iBoxx High Yield Corporate Bond ETF (HYG), just in time for the fund’s worst day in nearly two years. Almost $600 million was plowed into the ARK Innovation ETF (ARKK), which slumped 8.9% for its biggest drop since the height of the Covid turmoil.

It’s possible investors managed to exit before the worst of the declines — maybe even retaining some of their gains from a day earlier, when stocks enjoyed a broad post-Fed rally. TQQQ and ARKK report flows with a one-day lag, meaning Thursday activity isn’t visible yet. HYG recorded a tiny $23 million outflow.

But flows elsewhere suggest a broad pattern of bets on a change in market sentiment after months of rotation toward value and economically sensitive shares at the expense of growth stocks. Those moves also look ill-timed.

The three days through Wednesday saw some $372 million pulled from the ProShares UltraPro Short QQQ ETF (SQQQ), which offers an amplified bet against the Nasdaq 100. It surged 15% on Thursday. The ProShares Ultra VIX Short-Term Futures ETF (UVXY), the largest fund riding U.S. stock volatility, lost $124 million before rallying 26% for its best day in more than five months.

Meanwhile, the bets on growth continued even during Thursday’s pummeling. Data overnight showed the Invesco QQQ Trust Series 1 ETF (QQQ) lured $1.2 billion amid the rout, its biggest influx since March.