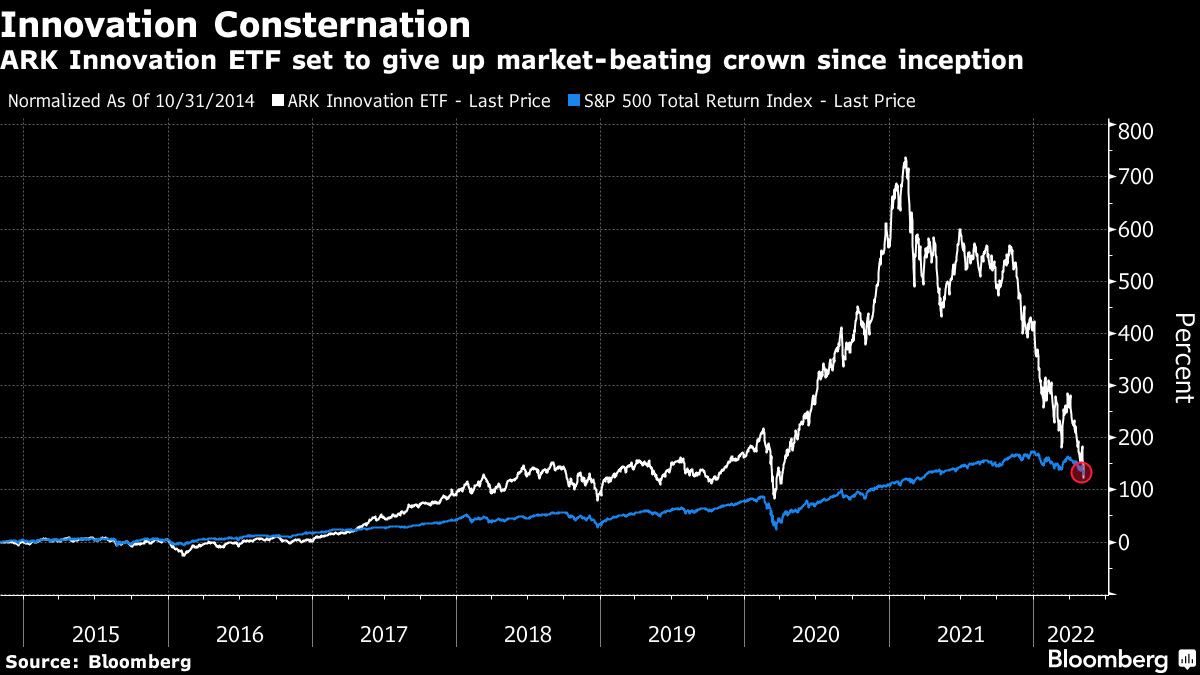 (Bloomberg) — The outsized gain that turned Cathie Wood into one of the world’s most famous proponents of active fund management is quickly evaporating as some of her favorite stock picks tumble.

After years of trouncing the market and just days after Wood issued a broadside against passive investing, her flagship ARK Innovation ETF now looks set to give up all the outperformance it once enjoyed against the S&P 500 Index. Wood’s strategy of picking stocks involved in “disruptive innovation” has fallen victim to the tech meltdown as investors flee high-priced growth shares in an environment of rising interest rates and high inflation.

The situation worsened Monday when ARK Innovation slumped almost 10%, compared with a 3% slide in the U.S. benchmark index. Wood’s firm didn’t immediately respond to a request for comment sent after business hours.

The shift in sentiment against tech stocks has created a perfect storm for Wood, the founder of Ark Investment Management LLC. Rising interest rates eat into equity valuations while concerns about economic growth have cooled speculative ardor — putting the shares of companies betting on new technologies particularly at risk.

To be sure, not all of Wood’s funds have given up their outperformance. The smaller ARK Next Generation Internet ETF has still handily beaten the S&P 500 since inception even after tumbling from its high, according to data compiled by Bloomberg.

Wood appears committed to the tech space despite recent losses. In recent tweets she suggested the global economy is undergoing the largest technological transformation in history and talked up the potential for Zoom Video Communications Inc. and Microsoft Corp.