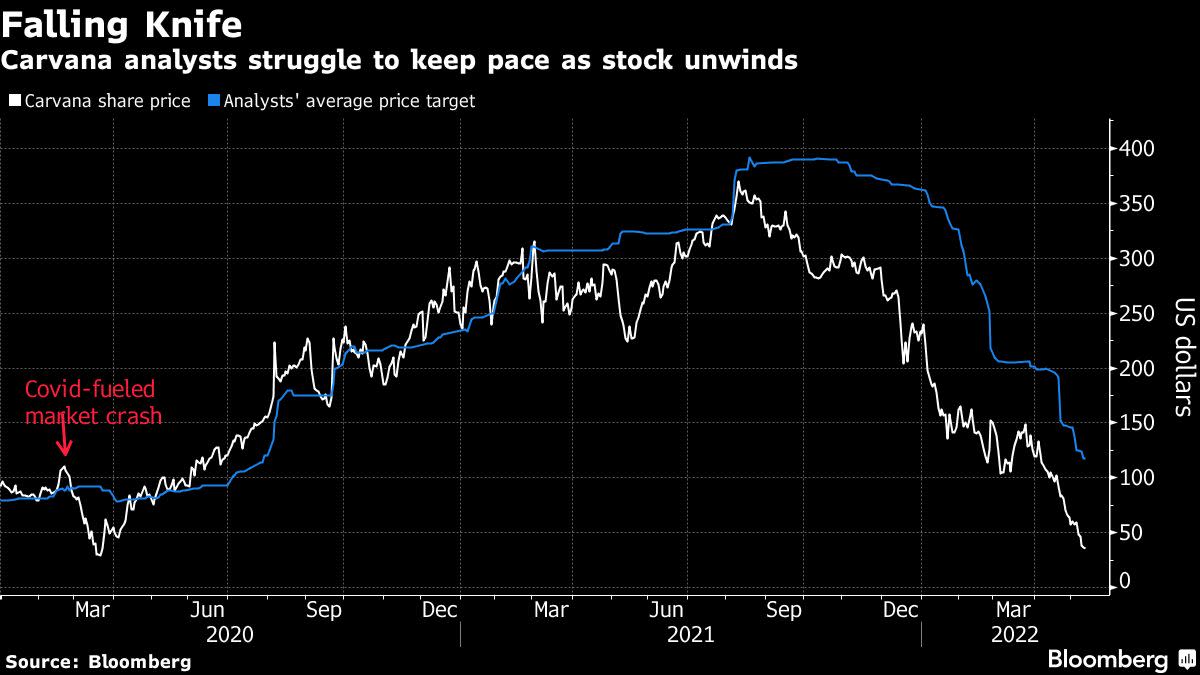 (Bloomberg) — Online used-car dealer Carvana Co. is trading as if the pandemic that spurred an almost 1,200% surge in its stock price never happened. Wall Street, however, has yet to fully adjust to the company’s new reality.

Analysts’ average target on the stock has tumbled 68% this year, but at $117 is still more than triple the current price of around $36. That decline also pales in comparison to the roughly 85% collapse in the shares in 2022 amid a broader selloff in riskier assets as investors fret over inflation, a hawkish stance from the Federal Reserve and a potential global economic slowdown.

The latest quarterly results from the company added to the concerns, with analysts warning about slowing industry demand amid soaring inflation. To make matters worse, Carvana struck what was seen as an “unfavorable” financing deal to fund an acquisition, followed by a plan to cut around 2,500 jobs, announced this week.

“This 10-12% headcount reduction is an acknowledgment that the company should move more aggressively to right-size its cost structure, but also could indicate that other profit improvement drivers could be slower to develop,” Wedbush analyst Seth Basham wrote in a note Wednesday. However, the analyst called it a “prudent step,” given weakening demand.

It was only about nine months ago that Carvana was one of the darlings of the stock market, riding high amid seemingly insatiable investor demand for businesses that enabled people to shop, work, exercise and entertain themselves without leaving their homes. What’s more, auto manufacturers were hit by crippling supply shortages, causing production halts and making new cars scarce. Demand for used vehicles soared as a result, a further boost for Carvana.

These forces combined to push Carvana shares above $370 in August, from below $30 in March 2020. And yet, the decline has been even sharper, with the stock losing more than 90% of its value in about half the time.

The company is far from the only pandemic-era darlings facing a rude awakening. Peloton Interactive Inc., the fitness company, has slid about 60% this year, while Netflix Inc.’s shares have retreated 70%.