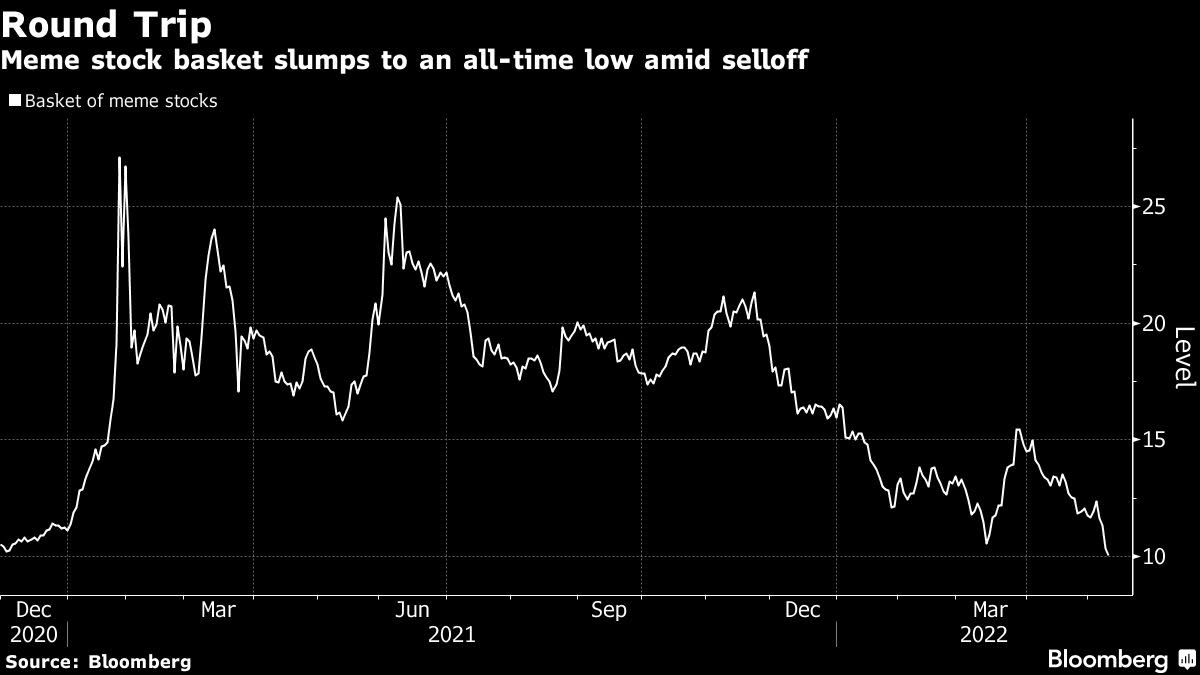 (Bloomberg) — A basket of so-called meme stocks that took Wall Street by storm at the start of 2021 slumped to a record low this week, erasing the last vestiges of the retail-investor driven rally that made them famous.

The group of 37 retail trading favorites tracked by Bloomberg extended a four-day slide on Tuesday, wiping out 15% of its value in the past week as global markets fell on concern of a looming recession. The index has shed 63% of its value from a January 2021 high.

Risky assets and former high-flying technology companies have been hit the hardest as investors respond to the Federal Reserve’s efforts to combat soaring inflation. The weakness across meme stocks mirrors drops among businesses that went public by merging with special-purpose acquisition companies and those favored by Cathie Wood’s ARK Innovation ETF.

The meme basket slipped 1.9% Tuesday, with companies that went public by merging with a blank-check firm backed by the “SPAC King” Chamath Palihapitiya among the group’s laggards. SoFi Technologies Inc. led the decline, slumping 12% to a record low after earnings were published earlier than expected.

Retail favorites GameStop Corp. and AMC Entertainment Holdings Inc. each fell more than 5% on Tuesday, while other well-known memes like Express Inc. and Bed Bath & Beyond Inc. also slumped.

Still, the latest selloff wasn’t enough to deter individual investors who helped power the rise of meme stocks last year. Both GameStop and AMC were among the four most bought stocks on Fidelity’s platform with buy orders far outpacing sales.

To be fair, investors who got in on GameStop and AMC before the mania took hold at the start of last year are sitting on hefty paper gains. Both stocks are up more than 350% from the start of 2021; however, they’re down 73% and 81% from their 2021 highs.