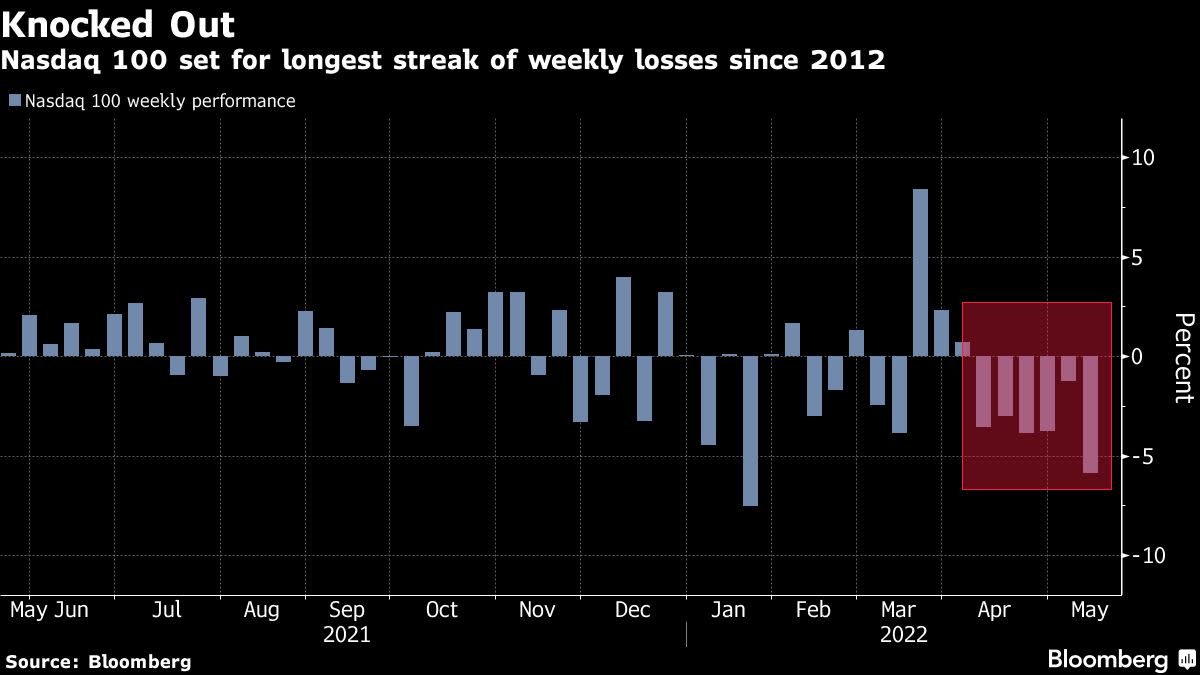 (Bloomberg) — Money is leaving every asset class and the exodus is deepening as investors rush out of names like Apple Inc., according to Bank of America Corp. strategists.

Equities, bonds, cash and gold all saw outflows in the week ended May 11, strategists led by Michael Hartnett wrote in a note, citing EPFR Global data. At $1.1 billion, technology stocks suffered their biggest withdrawals so far this year, second only to financials, which lost $2.6 billion.

“The definition of true capitulation is investors selling what they love,” Hartnett said, citing Apple, big tech, the dollar and private equity. The meltdown in cryptocurrencies and speculative tech now rivals the internet bubble crash and the global financial crisis, he said.

Apple, which was among the top stocks that led Wall Street’s main indexes to new highs after the pandemic-driven crash in 2020, is now trading in a bear market, falling nearly 10% this week alone. It’s a sudden turnaround for the company from even six weeks ago, when shares were close to a record high. The tech-heavy Nasdaq 100 Index is also poised for a sixth straight weekly drop, its longest such run since November 2012, as investors worry that hawkish central banks coinciding with high inflation would spark an economic slowdown.

The benchmark S&P 500 is also flirting with bear market territory — defined as a 20% drop from a record high — and although BofA strategists said they expect a bounce in the short term, they still see room for stocks to fall further. “Fear and loathing suggest stocks are prone to an imminent bear market rally, but we do not think ultimate lows have been reached,” Hartnett wrote.

The risk-off mood continued to hit all asset classes in the week. Outflows from equities were $6.2 billion, with a small inflow to US stocks outweighed by money exiting Europe and emerging markets. A total of $11.4 billion left bonds, while $19.7 billion exited cash and $1.8 billion departed gold.

On the other hand, safe Treasury bonds recorded their biggest inflow since March 2020.