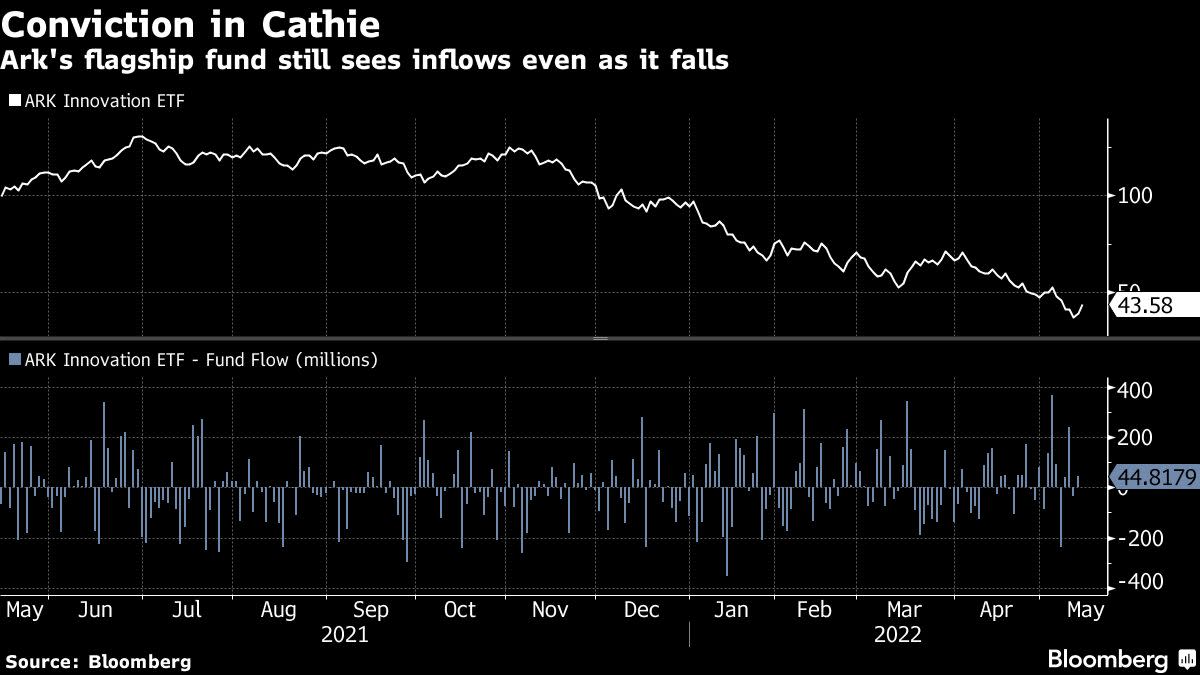 (Bloomberg) — After one of the most dramatic weeks yet for ARK Investment Management, Wall Street can no longer have any doubts: Cathie Wood is sticking with her strategy — and investors are sticking with her.

The chances of both have been questioned this year as a selloff in speculative tech stocks laid waste to her future-focused exchange-traded funds. Wednesday was a particular low point, with the flagship ARK Innovation ETF (ticker ARKK) slumping 10% in its third-worst drop on record.

One of the biggest drags that day was Coinbase Global Inc., the largest US cryptocurrency exchange, which tumbled 26% after disappointing results and amid a rout of digital assets. But while the rest of Wall Street was ditching the stock, Wood and her team stuck to their playbook and used the drop to increase holdings, adding about 860,000 shares in the week through Thursday.

In many eyes, it’s a system that risks loading up on losers. Hitched to a concentrated portfolio of often highly speculative bets, it leaves Wood and her firm with plenty of critics. But the clarity of the goal — chasing companies that can win big from major technological shifts — and ARK’s commitment to it has won some remarkably loyal fans.

“Cathie Wood has not wavered at all in her conviction in her strategy, and in fact has doubled down on her strategy,” said Nate Geraci, president of The ETF Store, an advisory firm. “That’s attractive to a certain segment of investors.”

As it plunged on Wednesday, ARKK actually posted inflows. It was a relatively small amount for the $7.8 billion ETF — about $45 million — but net inflows in 2022 are more than $1.5 billion. That’s for a vehicle that has plunged as much as 61% this year.

“Investors that are in this strategy have stayed loyal to this strategy, have a long-term time horizon and view selloffs as opportunities to deploy some additional capital,” said Todd Rosenbluth, head of research at ETF Trends.

Of course, there’s also no shortage of investors ready to bet against ARK. Short interest in the main fund is a relatively elevated 14.8% of shares outstanding, according to data from IHS Markit Ltd.

Meanwhile, by the close on Wednesday the price of the Tuttle Capital Short Innovation ETF, which aims to deliver the reverse performance of the innovation fund on a daily basis, was more than double that of the ARK ETF. In other words, betting against Wood’s flagship strategy for a day cost twice as much as buying the fund itself to hold.

But things were looking more positive for ARK by the end of the week as tech stocks managed a rebound. The innovation fund jumped 12% Friday after climbing 5.6% a day earlier. One of Wood’s high profile picks, Robinhood Markets Inc., was surging after cryptocurrency billionaire Sam Bankman-Fried revealed a major stake.

It’s a long way from undoing recent damage to Wood’s main ETF — the fund would have to jump about 260% from here to reclaim its all-time high. But at least it provides some respite for the faithful.

Ultimately, investors continue to lean on Ark ETFs as vehicles to get in and out of disruptive technology. In a turbulent week for the flagship fund, trading volume surged to a record 316 million shares.

As Ark sticks to its strategy, investors “know exactly what they’re going to get” and can rely on its funds to make pure-play trades on innovation, Geraci said. “The benefit of Cathie Wood not wavering from her strategy during this brutal downturn is that I think it will help the longer-term viability of Ark.”