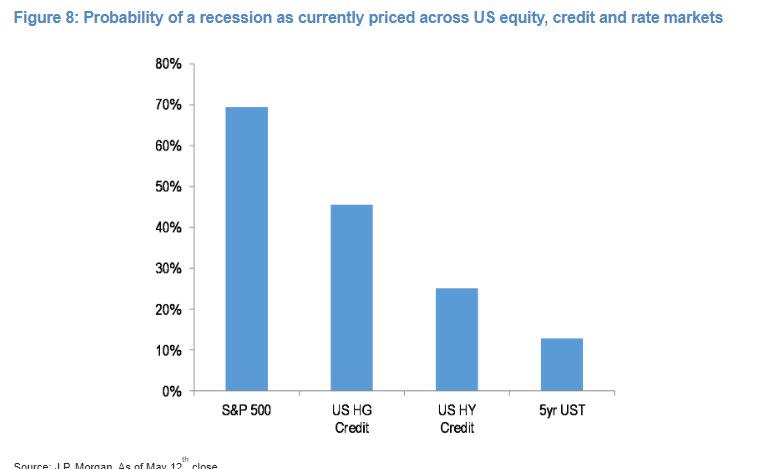 (Bloomberg) — Equity investors’ anxiety about a potential recession isn’t showing up in other parts of the market, which is giving JPMorgan Chase & Co. strategist Marko Kolanovic confidence in his pro-risk stance.

US and European stock markets are pricing in a 70% chance that the economy will slide into recession in the near-term, according to estimates by JPMorgan’s top-ranked strategist. That compares with a 50% chance priced into the investment-grade debt market, 30% in high-yield debt and up to 20% in rate markets, Kolanovic wrote in a note to clients on Monday.

Should the recession fears fail to pan out, subdued equity positioning and downbeat sentiment will help the stock market to recover, Kolanovic wrote.

Recession warnings been bubbling for months this year amid the war in Ukraine, coronavirus lockdowns in China and a more hawkish Federal Reserve. Anxiety that policy makers’ efforts to tame inflation will send the economy into a recession has caused investors to yank almost $10 trillion off US equity markets this year.

Even as signs the economy is weakening are everywhere, sniffing out evidence an outright recession is on its way is still tough. Manufacturing and services activity is off its peaks but still in expansion. Consumers continue to spend, while employment and housing data doesn’t scream danger.

Kolanovic, voted the No. 1 equity-linked strategist in last year’s Institutional Investor survey, recommended using recent weakness in oil and energy names to add exposure. A steadfast bull on value stocks, he has repeatedly urged investors to buy the dip during the stock-market rout in 2022. But those calls haven’t worked out so far as the S&P 500 has lost 16% since its January peak.

Similarly elevated recession odds have historically pointed to further equity losses when a recession materializes, according to a study by the firm’s strategists led by Keith Parker. But stocks usually rally when the worst doesn’t pan out, with the S&P 500 jumping 12% over the ensuing 12 months, they found. By Parker’s estimate, the market will be priced for an economic and earnings recession if the S&P 500 falls below 3,800.