Elon Musk Has a Bigger Problem Than Twitter Bots: A Huge Debt Burden 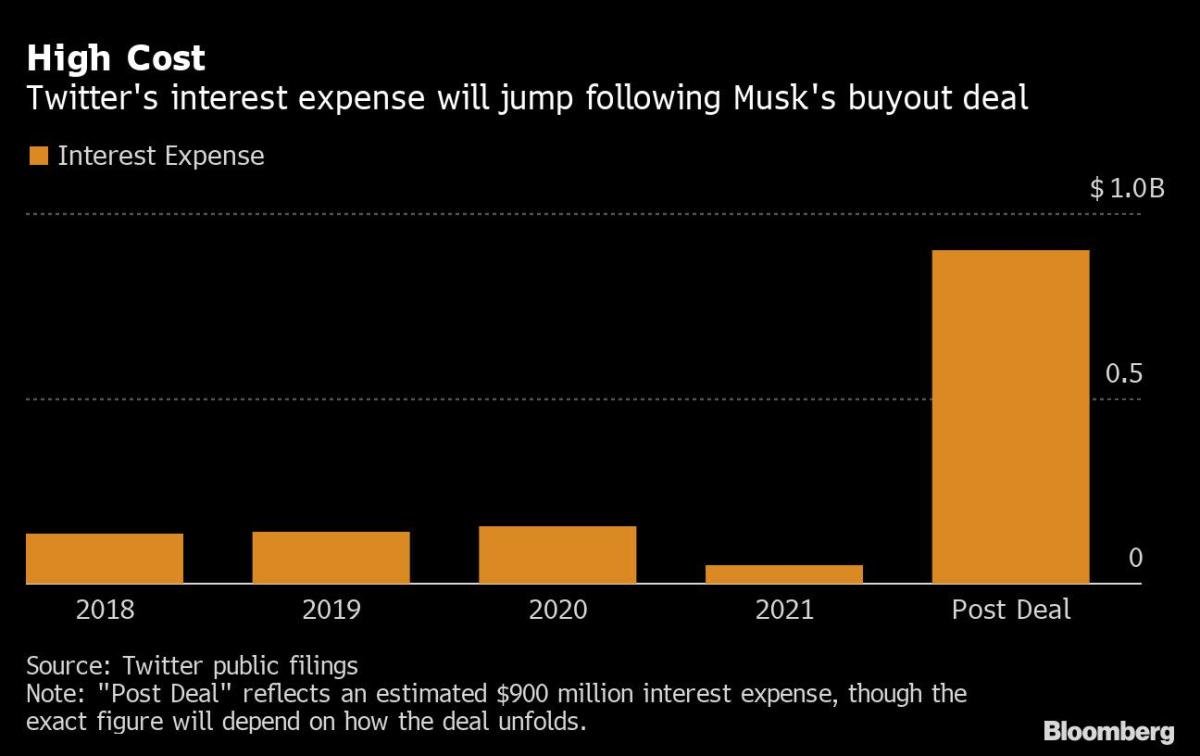 (Bloomberg) — Elon Musk may be directing his buyer’s remorse at Twitter Inc.’s bot problem. But underpinning the deal is a $13 billion debt bill that’s looking like a bigger burden by the day.

The package, drummed up in a rush and signed by banks before the end of the billionaire’s beloved April 20 weed holiday, will leave the social media platform with an annual interest expense approaching $1 billion, giving the company an alarmingly small margin for error.

To sober-minded credit analysts, second thoughts about the deal are to be expected.

The purchase will be funded with a leveraged loan and high-yield bonds. CreditSights estimates this will dramatically increase Twitter’s annual interest expense to around $900 million, while Bloomberg Intelligence sees $750 million to $1 billion.

With numbers like those, Twitter looks poised to burn cash, boosting the pressure on Musk to transform the company by finding new sources of revenue and slashing costs. That’s even the case with Wall Street analysts estimating record earnings in 2022, though those rosy forecasts could be imperiled if predictions for a US recession — Musk said Monday one is already under way — come true.

“This is just a bad capital structure to put on a business like Twitter that has never proven to be highly profitable,” said John McClain, portfolio manager at Brandywine Global Investment Management. “It’s been a public company for quite some time and they never have seemed to really figure out how to attractively monetize the consumer.”

Musk himself is casting doubt over his own deal, saying this week that he won’t proceed unless Twitter proves bots make up fewer than 5% of its users.

Debt is only one of three components of Musk’s financing. He’s found 19 other equity investors to join him in $27.25 billion of equity commitments. And he’s taken out a $6.25 billion margin loan against his Tesla shares, but he’s currently trying to replace that by bringing in preferred equity investors, which could include Apollo Global Management Inc. and Sixth Street.

Bankers pulled all-nighters and worked through the Easter and Passover holiday weekend, rushing to meet Musk’s April 20 deadline to build the financing package. What they cooked up will take Twitter far deeper into debt, boosting its interest costs from $53.5 million during the past 12 months.

That gives Musk little room for error, though he’s not on the hook for the debt. As is typical in a leveraged buyout, Twitter will be stuck repaying if anything goes wrong, while Musk and his fellow equity investors can only lose the cash they put into the deal.

“Leverage is really high and free cash flow is going to be negative out of the gate, so that certainly adds an element of risk to the deal,” Jordan Chalfin, a senior analyst at credit research firm CreditSights, said in an interview. “Twitter really needs to grow into their capital structure and drive earnings higher in order to cover both their capital expenditures and their interest expense.”

Fears are also growing that a recession could be on the horizon, which would make this an even worse time to load debt onto Twitter, as most of its revenue comes from advertising. “In a poor macroeconomic background, the first things that companies pull in terms of marketing budgets is advertising spending,” said Bloomberg Intelligence analyst Robert Schiffman.

Meanwhile, selling corporate debt has gotten more difficult in recent weeks. Rising rates have hit junk bonds the hardest, and the average yield, a proxy for the cost of borrowing, has increased by more than a full percentage point since banks agreed to the Twitter deal to about 7.6%. The leveraged loan market has cooled, too.

Analysts see Twitter posting record earnings before interest, taxes, depreciation and amortization of $1.67 billion in 2022. Twitter has forecast roughly $925 million of capital expenditures. Deduct that and Twitter’s newly increased interest expense from its Ebitda, and the company would be burning through cash.

Twitter does have about $6.3 billion in cash and short-term investments that could support burning cash for a few years, Bloomberg Intelligence’s Schiffman said.