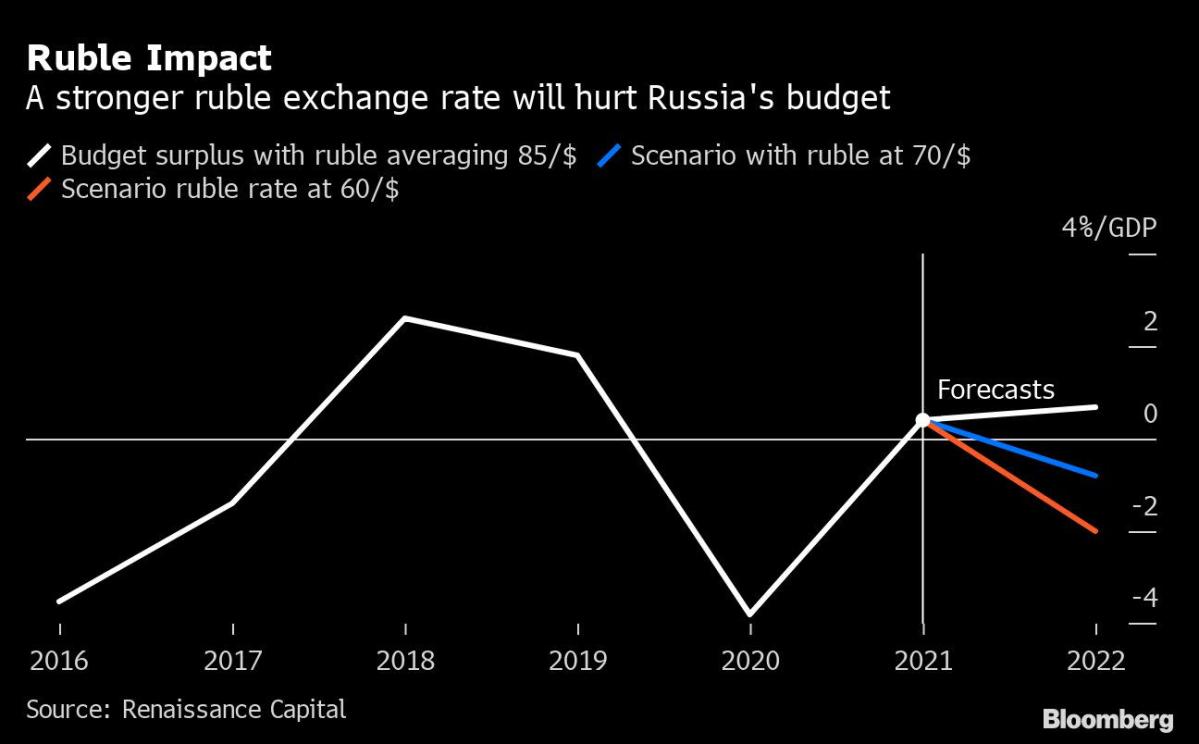 (Bloomberg) — As the ruble’s official exchange rate parts ways with its value on the street, dollars are becoming hard to find.

For Boris, a doctor based in Moscow, the search got so desperate that he pondered a high-tech, and seemingly improbable, black-market scheme that a friend was pushing.

After interacting with a bot via messenger app, his acquaintance transferred rubles electronically to receive a barcode that he scanned to access a safe storage box at a Moscow mall.

“Banks either have no foreign currency, or, if they do, they sell it at a bad rate,” said Boris, 35, who requested that his surname not be used due to the sensitivity of the matter. Still, “you’d have to really trust the system to do that. I wouldn’t risk it,” he said.

Vladimir Putin’s war against Ukraine has put the economy on track for its sharpest contraction in decades. But the Russian currency is up about 25% against the U.S. dollar since the invasion began, giving it the incongruous title of best performer globally.

While that’s allowed Putin to brag that the sanctions “Blitzkrieg” of the West has failed, ordinary Russians can’t take advantage of the currency’s strength. Oil flows and capital controls have warped the official rate, and the ruble is around 20% weaker at exchange points and on the black market — reminding many Russians of its Soviet predecessor.

“It’s like trying to show the Soviet Union is beating America by waving a copy of the Izvestia newspaper in someone’s face in 1982 and saying: ‘Look, the dollar is worth only 64 kopecks!”’ said Sergey Khestanov, a Moscow-based professor of finance and banking and advisor to the chief of executive of the Otkritie brokerage. “I’d agree — if anyone could actually buy a dollar for 64 kopecks.”

Under the central bank’s latest rules, lenders can only sell dollars and euros they’ve received since April 9. Individuals can withdraw hard currency, but only from accounts opened before March 9 and not more than the equivalent of $10,000 before September. The limit for physically carrying out cash when going abroad is also $10,000.

In an echo of the illegal money changers operating in the late Soviet period, middlemen working in cahoots with bank employees lure buyers with rates that beat the official ones posted in currency exchanges.

As in the past, there’s always a danger of walking away with counterfeit notes, according to Boris. He eventually opted for the middleman and paid 15% more than the official rate to buy $2,000 for his his ex-wife and children. They needed cash on hand for a holiday in Turkey since sanctions stopped Russian-issued credit cards from working abroad.

On Monday, banks were selling dollars on average for 20% more than the ruble price quoted on the Moscow Exchange, according to a survey of about 70 Moscow banks and exchange points by the RBC and Banki.ru financial websites. Black-market rates shown in currency exchange channels on messenger apps ranged from 73 rubles to 75 rubles in Moscow, while the ruble closed at 63.4 per dollar on Monday on the Moscow Exchange.

That may be a far cry from the giant gap between official and black market rates in a country like Zimbabwe, but the discrepancy in Russia reflects the reality of an economy that’s never been this isolated in its post-Soviet history.

Sanctions severing Russia from the global banking system and emergency capital controls at home are choking off imports and making large-scale capital flight impossible. At the same time, international penalties have been carefully crafted to allow countries to continue buying Russia’s oil, gas and other commodities, keeping billions of dollars flowing into Kremlin coffers each week.

Defending the lopsided US approach, Secretary of State Antony Blinken dismissed the ruble’s rally at the start of April as “not sustainable.” The currency has appreciated 30% since Blinken spoke, but Tatha Ghose at Commerzbank AG agrees with him.

“The exchange rate no longer has any forward-looking component because sanctions and capital controls prevent meaningful capital flow,” Ghose wrote in a report. The ruble is moved by “day-to-day current demand and supply for trading those items which are still possible to export and import.”

Even the Bank of Russia admitted in its latest monetary report that sanctions have essentially turned the rate into a blunt expression of the country’s trade balance.

As an embargo on oil and gas by European governments kicks in by late 2022, Ghose predicts the ruble will slump 10% by year-end and a further 20% by the end of 2023.

To be sure, some ruble weakness would be welcomed by the Finance Ministry.

The dollar price of Russia’s main Urals blend of crude oil is falling and the currency’s appreciation means the government collects ever fewer rubles per barrel, imperiling its budget revenue targets.

Russia will be left with “virtually no cushion for the economic slump and the financial pressures of the protracted war in Ukraine,” TS Lombard’s Christopher Granville and Madina Khrustaleva wrote in a note.

Back on the dollar trail in Moscow, Sofya, 22, a student, managed to buy $550 dollars at an official exchange point on her third attempt.

She’s getting the cash together to take to her boyfriend, who she packed off to Prague amid constant speculation Putin will announce a national call-up as the war drags on. Her tip: set out early and contact the banks in advance to avoid disappointment.

“The exchange rate was bad, way higher than the official rate,” she said. “But at least they weren’t charging a 30% commission like they were in February.”