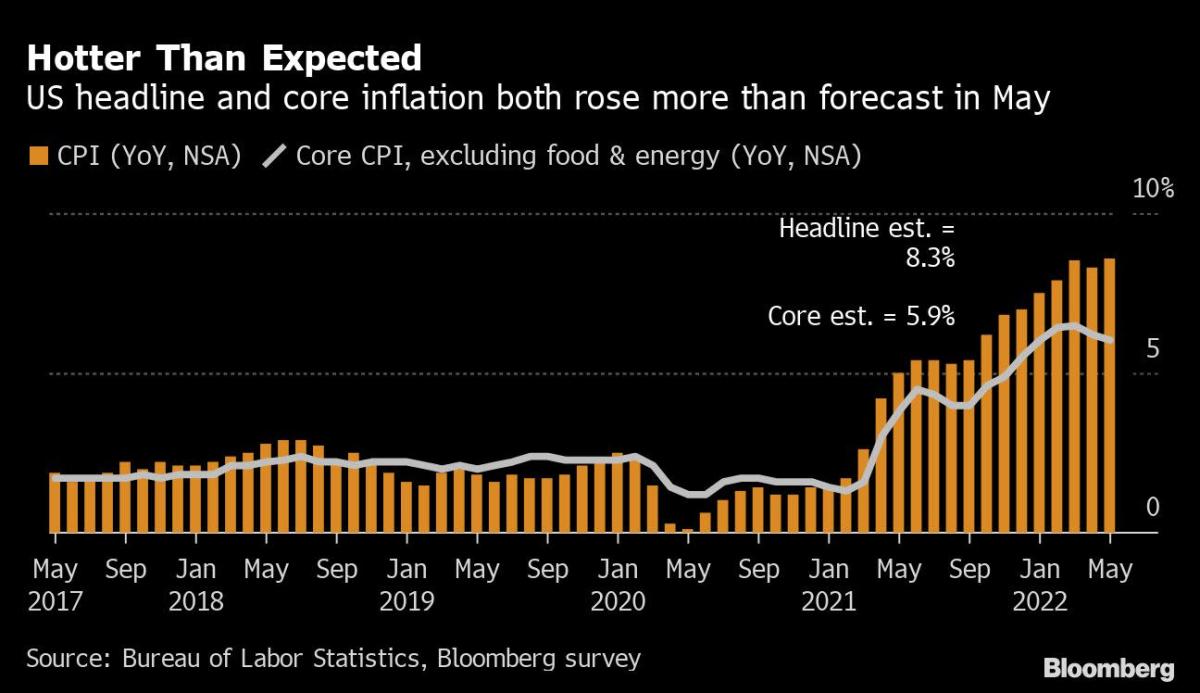 “We anticipate that ongoing rate increases will be appropriate,” Powell said Wednesday in his semiannual testimony to the Senate Banking Committee. “Inflation has obviously surprised to the upside over the past year, and further surprises could be in store. We therefore will need to be nimble in responding to incoming data and the evolving outlook.”

Powell’s remarks largely reiterated comments at a press conference last week after he and his colleagues on the Federal Open Market Committee raised their benchmark lending rate 75 basis points — the biggest increase since 1994 — to a range of 1.5% to 1.75%.

While Powell told reporters last week that another 75 basis-point increase, or a 50 basis-point move, was on the table for the next meeting in late July, Wednesday’s text made no reference to the size of future rate hikes. Fed Governor Christopher Waller said Saturday that he would support a 75-basis-point rate increase in July should economic data come in as he expects.

“We understand the hardship high inflation is causing,” Powell said Wednesday. “We are strongly committed to bringing inflation back down, and we are moving expeditiously to do so.”

Investors expect the US central bank to keep raising rates to a peak around 3.6% by the middle of next year, according to interest-rate futures.

“Financial conditions have tightened and priced in a string of rate increases and that’s appropriate,” Powell said in response to a question following his opening remarks. “We need to go ahead and have them.”

The Labor Department’s consumer price index rose 8.6% last month from a year earlier, a four-decade high. University of Michigan data showed US households expect inflation of 3.3% over the next five to 10 years, the most since 2008 and up from 3% in May. The rising cost of living has angered Americans and hurt the standing of President Joe Biden’s Democrats with voters ahead of November congressional midterm elections.

Fed officials have admitted that they were too slow to tighten and are now trying to front-load rate increases in the most aggressive policy pivot in decades.

While a recession isn’t in the Fed’s forecast, economists are increasingly flagging the likelihood of a downturn sometime in the next two years.

Former New York Fed President Bill Dudley said in a Bloomberg Opinion column Wednesday that a recession is “inevitable” within the next 12 to 18 months. An economist at the Fed, Michael Kiley, said in a paper Tuesday that the risk of a large increase in the unemployment rate is above 50% over the next four quarters, based on a simulation incorporating inflation data, unemployment, corporate bond yields and Treasury yields.

“The tone of Fed Chair Jerome Powell’s prepared remarks before the Senate Banking Committee was consistent with his hawkish comments at the latest FOMC press conference. It suggests central bankers have acknowledged the reality of the inflation problem and accept the costs that will accompany tighter monetary policy, including increasing risks of a downturn.”

“The American economy is very strong and well positioned to handle tighter monetary policy,” Powell said in his opening remarks.

Concern over the outlook for global growth has seen oil prices ease back somewhat in the last few days, potentially providing some relief to sky-high gasoline prices. At the same time, US hiring remains strong and consumption indicators suggest demand is holding up despite the blow to real disposable income from higher inflation.

“The tightening in financial conditions that we have seen in recent months should continue to temper growth and help bring demand into better balance with supply,” Powell said.

Policy makers’ latest forecasts, released last week, show the level of rates roughly doubling in the second half of the year to a target range of 3.25% to 3.5%. They saw rates peaking next year at 3.8%.

Officials have also begun shrinking their massive balance sheet. The combined impact of higher borrowing costs and so-called quantitative tightening is expected to come at some cost to jobs.

Unemployment was near a 50-year low of 3.6% last month and Fed officials forecast it rising to 4.1% by the end of 2024, when they see rates peaking at 3.8%. Inflation was projected to decline toward their 2% goal by then from current readings of more than three times that level, according to the gauge that the Fed targets.

Forward guidance from officials on the future path of policy, as well as the rate increases they’ve already delivered, have helped push 10-year Treasury yields above 3%, about double from the start of the year, while the S&P 500 stock index is down more than 20%. Surging mortgage rates are helping to cool the the housing market.