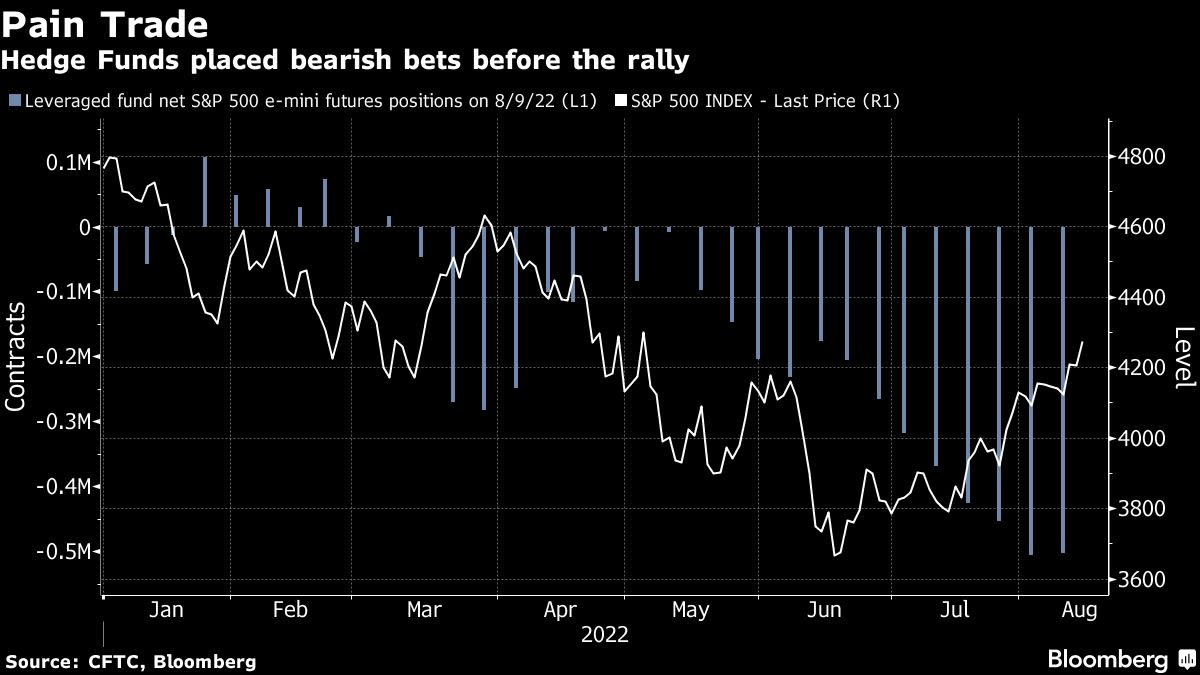 Big data surprises, including a blockbuster jobs report and a softer-than-expected July consumer price reading, have caught a heavily hedged investor base off guard, as the S&P 500 Index enjoys a nearly 17% rally from the June bear-market low.

Economic angst and speculation that price pressures are peaking have helped global bonds climb almost 4% from their mid-June nadir, while once-hot stock shorts are backfiring.

Put another way, every investing trend that defined the wild first-half is staging a messy reversal in the latest twist of this exhausting year.

With Federal Reserve officials continuing to issue hawkish missives, playing it dumb — by sitting in cash or long-dollar positions — may look like a smart move for now.

“It’s been a volatile year for stocks and bonds — first to the downside, now to the upside,” said Willie Delwiche, investment strategist at All Star Charts. “Moving to the sidelines and letting the volatility play out is often an overlooked and under appreciated option.”

Investors appear to be betting that the Fed will pivot to a slower pace of interest-rate increases. That’s hurting risk-off trades and forcing hedge funds to cover short wagers.

Net-short leveraged positions in S&P 500 futures reached the most bearish since 2015 in the run up to the recent rally (they’ve since started to be unwound), according to data from the Commodity Futures Trading Commission. Meanwhile a basket of the most-shorted stocks tracked by Goldman Sachs is up almost 39% so far this quarter.

Retail investors, who watched their post-pandemic profits wiped out this year and dashed out of stocks in June, are rushing back. Share purchases from small-fry traders jumped 62% during the week through Tuesday, industry data compiled by JPMorgan Chase & Co. show.

Trend followers, who started the year as one of the biggest winners by shorting stocks and bonds, have also been swept up in the reversal. After notching a more than 20% gain in the first half of this year per a Societe Generale SA index, these so-called commodity trading advisers have lost more than 7% over the past two months.

As markets were revived by the idea that the US central bank could soon reduce the pace of tightening, the cohort exited $70 billion in stock shorts over the past month and have now turned positive on the asset class, according to Nomura Holdings Inc.

“Some shorts have been crushed,” said Charlie McElligott, a cross-asset strategist at Nomura. “Most shorted baskets and popular shorting proxies are exploding higher in a short squeeze since mid-June.”

Even after the bounce on hopes for a soft economic landing, the 60/40 portfolio, as tracked by a Bloomberg gauge, is down nearly 11% since the start of the year, while world stocks and global government bonds have lost around 13% in 2022.

On the other hand, doing nothing but buying a cash-like exchange-traded product such as the SPDR Bloomberg 1-3 Month T-Bill ETF or the dollar would have returned 0.2% or 7.4% respectively for the same period.

“Maintaining some dry powder in the form of cash allows us to be more nimble and to be liquidity providers when others are forced sellers in choppy, illiquid summer months,” said Kelsey Berro, a fixed-income portfolio manager at JPMorgan Asset Management. “Cash is also yielding significantly more today than at the start of the year.”