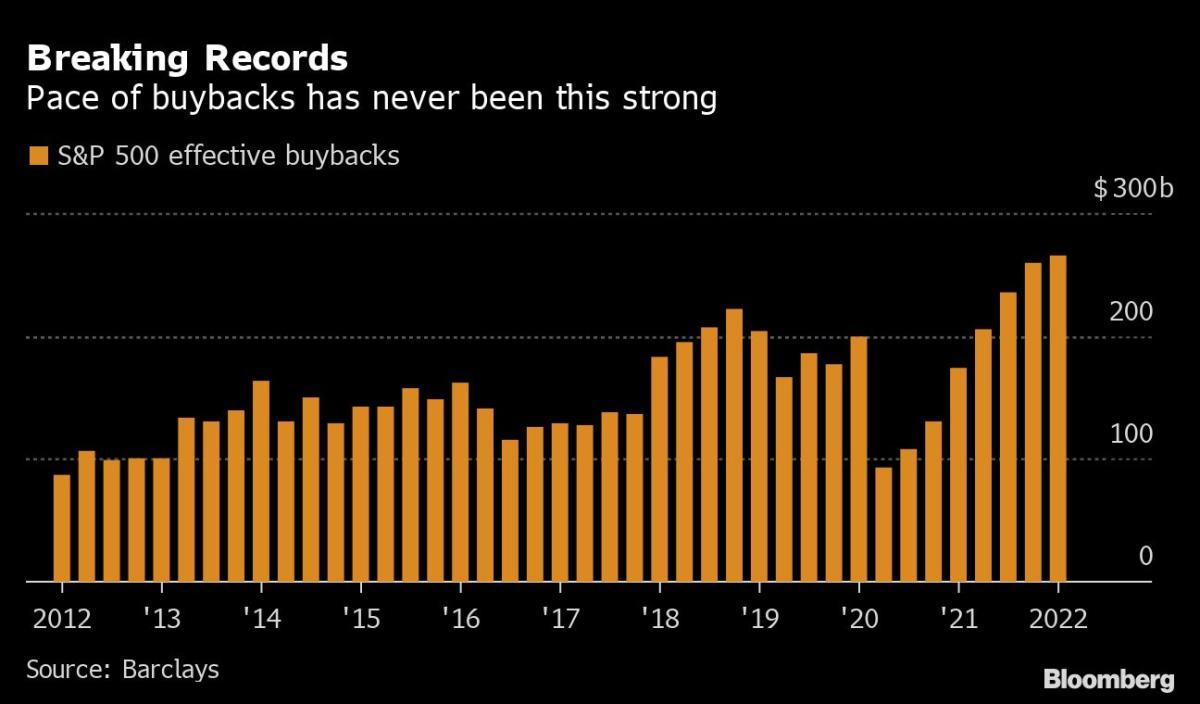 (Bloomberg) — An end to corporate America’s record stock-buying spree is giving equity bulls one more thing to worry about.

JPMorgan Chase & Co., Citigroup Inc. and Best Buy Co Inc. all paused buyback plans when reporting their second-quarter results, deciding to hold on to cash instead as the Federal Reserve’s interest-rate hikes risk driving the economy into a recession. They’re among the 10 that have halted programs this year for reasons unrelated to M&A — a “very, very rare” phenomenon, according to Birinyi Associates.

The moves may be an early sign of a pullback from an era of record stock buybacks that erupted in the wake of the pandemic, when executives tapped cash hoards to purchase almost $1 trillion of their own shares. While analysts debate how much impact stock buybacks ultimately have, the retreat threatens to remove one crutch from a fragile market already contending with inflation and the specter of a global growth slowdown.

“Buybacks have been the largest source of US equity demand this year and a big support for stock markets,” said Mathieu Racheter, head of equity strategy at Julius Baer. “But buybacks are expected to slow from here amid a dimmer outlook for earnings and lower CEO confidence.”

By the end of the first quarter, US firms had spent just over $265 billion on buying back stock, a record amount, according to data from Barclays Plc. While repurchase announcements have still been strong year-to-date, some US firms “have used the second-quarter results to curtail existing buybacks on growth outlook concerns,” strategist Emmanuel Cau said.

Other companies are also favoring using cash to bolster their businesses during a tough economic period.

Retailer Best Buy said it was pausing repurchases as part of its capital management strategy “in response to the current sales environment.” The company slashed its guidance and said inflation is pummeling consumers. And Starbucks Corp. founder Howard Schultz suspended the coffee chain’s buyback plan in April, saying the cash could be better spent on stores and staff.

The outlook for buybacks next year is even more uncertain, with a proposed tax on US stock repurchases expected to go into effect. Democrats are hoping that the 1% excise tax will slow the use of corporate buybacks, because they produce capital gains but no immediate tax bills.

That may open up a window for companies to pull forward their plans into the second half of this year. Still, strategists don’t expect this to provide a big prop to markets, given that overriding macroeconomic uncertainty will outweigh any positive sentiment from accelerated repurchases.

“Companies with clear guidance will likely try to front-load some of the buybacks, though it may not be as market-moving as some expect given the major macro drivers at the moment,” said Esty Dwek, chief investment officer at Flowbank SA.

Robert Cantwell, portfolio manager at Upholdings Group LLC in Nashville, agrees. “We don’t expect a ‘buyback rush’ in the second half since they are more dependent on share prices than a 1% tax,” he said. “The tax is more likely to depress share buybacks in favor of more M&A or internal capex.”

But there’s some good news for those looking for a buyback boost: the stock market rebound since its June low may also reduce companies’ need to support their shares through repurchases.

“Equity market prices have been recovering strongly over the last month and buybacks should absolutely slow down as a result,” Cantwell said. “Slowing buybacks can be a sign of a strong market, as opposed to a weak one.”