Small Caps Cheaper Than Since the Dot-Com Bubble 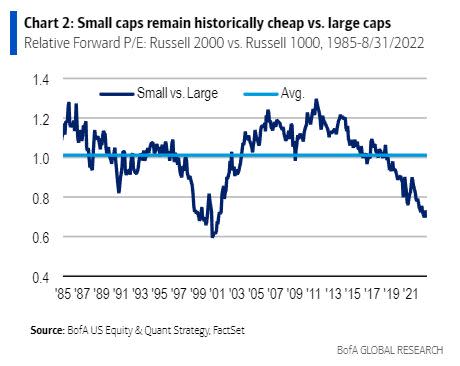 (Bloomberg) — August’s broad equity selloff has left valuations for beaten down small-cap shares at the cheapest level compared to their larger counterparts in nearly two decades, according to Bank of America Corp.

At 12 times projected earnings, the Russell 2000 Index of small-cap stocks is cheaper than even its historical averages, BofA data show. In fact, the relative forward price-to-earnings ratio for the index versus the Russell 1000 Index of large caps fell to 0.70 times from 0.71 times, more than 30% below its historic average of 1.01 times. That remains at the lowest level since the early 2000s dot-com bubble.

The small-cap valuations could offer evidence of a market bottom since historically, broader markets don’t bounce higher until small-cap stocks bottom. For long-term traders, current valuations for the small-cap index imply about 12% annualized returns over the next decade, compared with about 8% for the Russell 1000, BofA data show.

The Russell 2000’s forward price-to-earnings ratio fell to 11.8 times from 12.4 times, which is more than 20% below its long-term average since 1985, according to Jill Carey Hall, equity and quantitative strategist at Bank of America.

“Very elevated valuation dispersion within the Russell 2000 overall — which can suggest more opportunity for stock selection — is also supportive for value near-term,” Carey Hall wrote in a note to clients.

Value stocks, which were challenged in a low-rate environment, have come back in vogue this year as growth shares have been pressured by higher borrowing costs, which drag on the present value of future cash flows. Since 1989, prior peaks in valuation dispersion have coincided with Russell 2000 Value Index outperforming Russell 2000 Growth Index over the next three months nearly 70% of the time.

In particular, there is “lots of opportunity” for small-cap value investors, Carey Hall said. Energy, for instance, ranks among the best sectors in BofA’s small-cap sector rankings based on valuations, revisions, technicals and the bank’s analyst upgrades-downgrades. The group also remains one the most historically inexpensive sectors versus history and against its large-cap peers, she said.