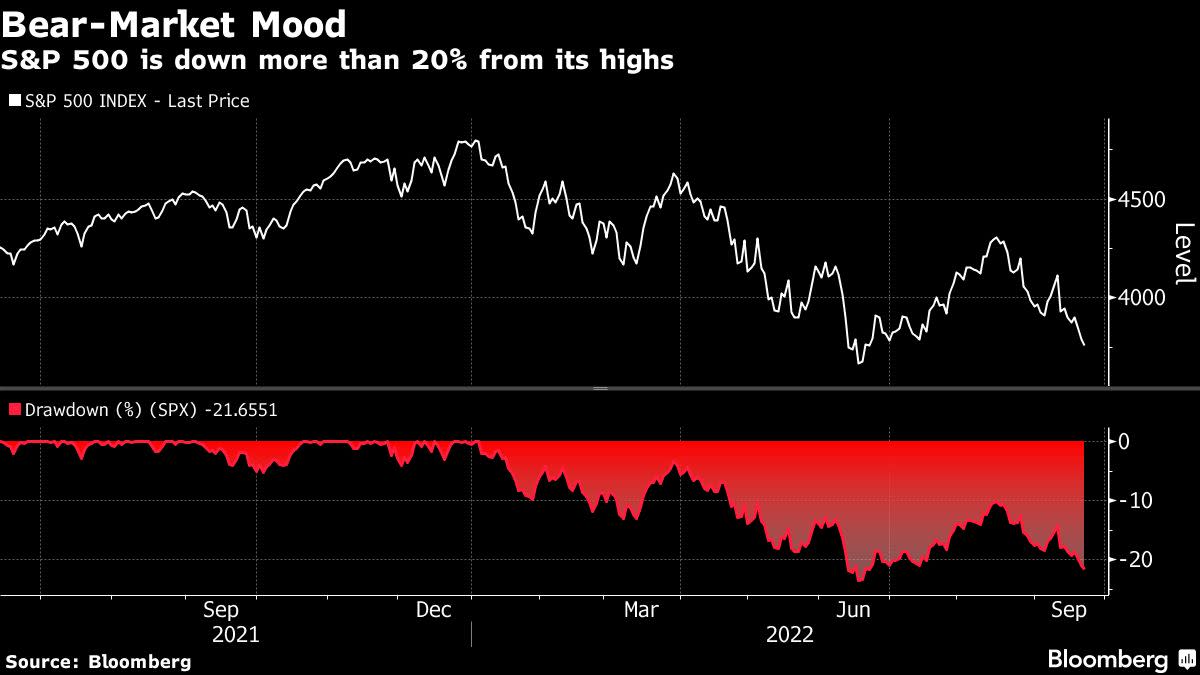 (Bloomberg) — As the Federal Reserve’s intensifying fight against inflation sinks every asset on Wall Street, investors are asking: Why buy now when things could get cheaper still?

What started as a mild stock selloff this month has morphed into a deepening interest rate-spurred rout that’s wiped out virtually all of the summer gains in the S&P 500. Mouth-watering yields on corporate debt haven’t been enough to entice buyers while investors are increasingly parking their money in cash, waiting for more central bank-inflicted pain on the economy — and a better buying opportunity. At the same time, the Citrix Systems Inc. debt debacle highlights the tighter climate for capital-raising for Corporate America, darkening the outlook for indebted companies in the stock market.

All this comes at a bad time for companies facing shrinking profit margins. Stock valuations, while below multiyear highs, may have further to fall after the S&P 500 doubled from the pandemic bottom. And even with nominal Treasury yields at the loftiest levels in over a decade, inflation-adjusted rates have scope to climb even higher.

Jerome Powell and his Fed colleagues won’t be upset with the sharp drop in asset prices. They’ve spent the past six months, at first subtly and then directly, saying that inflation can’t come down until the excesses in financial markets ease. Since the central bank began tightening in March, 10-year yields have jumped more than 1.5 percentage points, stocks have plunged 20% and junk-bond spreads are wider by about 90 basis points. More pain is likely.

“The message from the Fed is that ‘We’re going to keep hiking until something goes wrong,’” Bespoke Investment Group Global Macro Strategist George Pearkes said. “The fact that nothing’s broken yet tells us we’re not done. If the Fed is in that mood, how are markets supposed to bottom?”

With the S&P 500 falling a third straight day Thursday, following the worst performance on a Fed day since January 2021, it appears that investors are finally heeding the central bank’s message: After the era of peak monetary stimulus, asset-price disinflation is a necessary byproduct of cooling price pressures in the broader economy.

Minneapolis Fed President Neel Kashkari said as much in late August, commenting that he was “happy” to see the market’s rout in response to Powell’s Jackson Hole speech, where Chair Jerome Powell hammered home that the central bank was committed to stamping out inflation.

Powell repeatedly referenced the labor market at Wednesday’s press conference, noting that its strength remains “out of balance” as policy makers seek to get a grip on the hottest inflation in a generation.

After breaking a three-month straight streak of outflows in August, more than $5 billion has been drained from US equity exchange-traded funds, Bloomberg data show. Meanwhile, the more speculative corners of the market are being punished. A Goldman Sachs basket of nonprofitable tech companies has plunged 12% so far in September, on track for its worst monthly performance since May.

“If there are more aggressive sellers and less aggressive buyers, that supply-demand imbalance is going to cause some disinflation in equity prices for sure,” Art Hogan, chief market strategist at B. Riley, said in a phone call. “And to the extent that that’s what we’re going through now, it’s similar to demand being diminished for other things.”

All the same, while prices continue to decline across asset classes, there are no big signs of investor panic like forced liquidations or systemic stress. Financial conditions — a cross-asset measure of market stress — are closer to levels they were leading into the Fed’s kickoff hike in March. While credit issuance has slowed, investment-grade companies are still broadly capable of tapping primary markets, albeit at a price.

Against that backdrop, it makes sense to hold out and wait for bigger bargains with the Fed on a warpath, according to Kim Forrest at Bokeh Capital Partners.

“The Fed has laid out this strategy for killing inflation and it looks like it’s going to kill the economy too. And that is why we have a buyers strike,” Forrest, the firm’s founder and chief investment officer, said in an interview. “The whole thing is I sat there this morning looking over things I want to buy and my big question is this: are they going to be cheaper next month? And the answer is maybe. Maybe.”