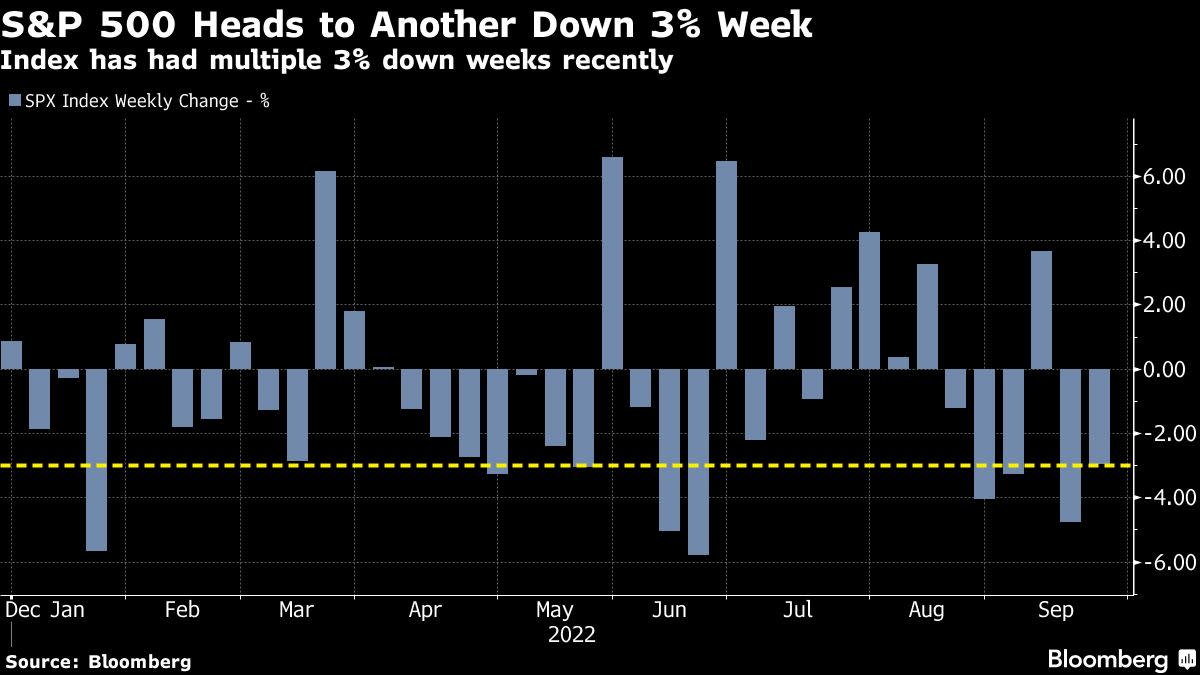 (Bloomberg) — The spillover from the UK’s proposed tax cuts is washing into the US stock market.

The S&P 500 is set to open down more than 1%, bringing its rout in the week past 4%. The index already closed below the closely watched level of 3,800, leaving the June bear-market low of 3,666 as the next line of support on technical charts.

The UK government unveiled a sweeping tax-cut plan that crashed the pound and the nation’s bonds as investors fretted over the stimulative effects with inflation running rampant. That soured an already tart mood for risk assets around the world. Futures on the S&P 500 plunged 1.4% as of 8:42 a.m. in New York, and traders who watch charts for signs of where the drop might ease are bracing for the worst.

“The technicals have fallen out of bed,” Art Hogan, chief market strategist at B. Riley, said in a phone call. “Losing 3,800 now brings the June lows into line of sight, so that has people waiting for that to happen.”

The S&P 500 is set to fall for a fourth straight day and is on track for its fourth weekly decline in five. The selloff has been unforgiving across sectors: the gauge has had over 400 members close lower on each of the last three days before Friday.

Its breakdown since the August peaks solidifies the downtrend channel in place since the bull market apex in early January, according to Gina Martin Adams at Bloomberg Intelligence. “The breakdown beneath 3,900 support leaves little for the index to grasp at on its way to testing the June lows,” she wrote in a note.

The Federal Reserve this week made it crystal clear that it’s going to keep raising rates sharply until officials see signs that price pressures are easing. That process won’t be “painless” for the labor and housing markets, Fed Chair Jerome Powell warned.

Its rate hike on Wednesday came with projections that the central bank has another 1.25 percentage points of tightening in store for investors this year, a far more aggressive pace than investors expected.

Despite the rout, stocks are still far from being obvious bargains. At the low in June, the S&P 500 was trading at 18 times earnings, a multiple that surpassed trough valuations seen in all previous 11 bear cycles, data compiled by Bloomberg show. In other words, should equities recover from here, this bear-market bottom will have been the most expensive since the 1950s.

While investors used to be positioned as if the economy was headed for a soft landing, that’s no longer the case, according to Anastasia Amoroso, chief investment strategist at iCapital.

“What the markets really need to do is price in a recession because it seems like that’s what a weakness in the labor market would ultimately cost,” she said on Bloomberg TV this week.

“We may need to see a break below the bottom of that trading range to really find dirt-cheap value in equities,” Amoroso said. “We’re just not there yet, so the trade for now is to actually be defensive and to get paid while you wait for this bottom in the market.”

As for the June low, many are seeing an ominous signal in the number. The S&P 500 would have to fall another 2% to reach it.

“Anything that’s lower than where it is now feels devilish,” Kim Forrest, founder and chief investment officer at Bokeh Capital Partners, said in an interview.