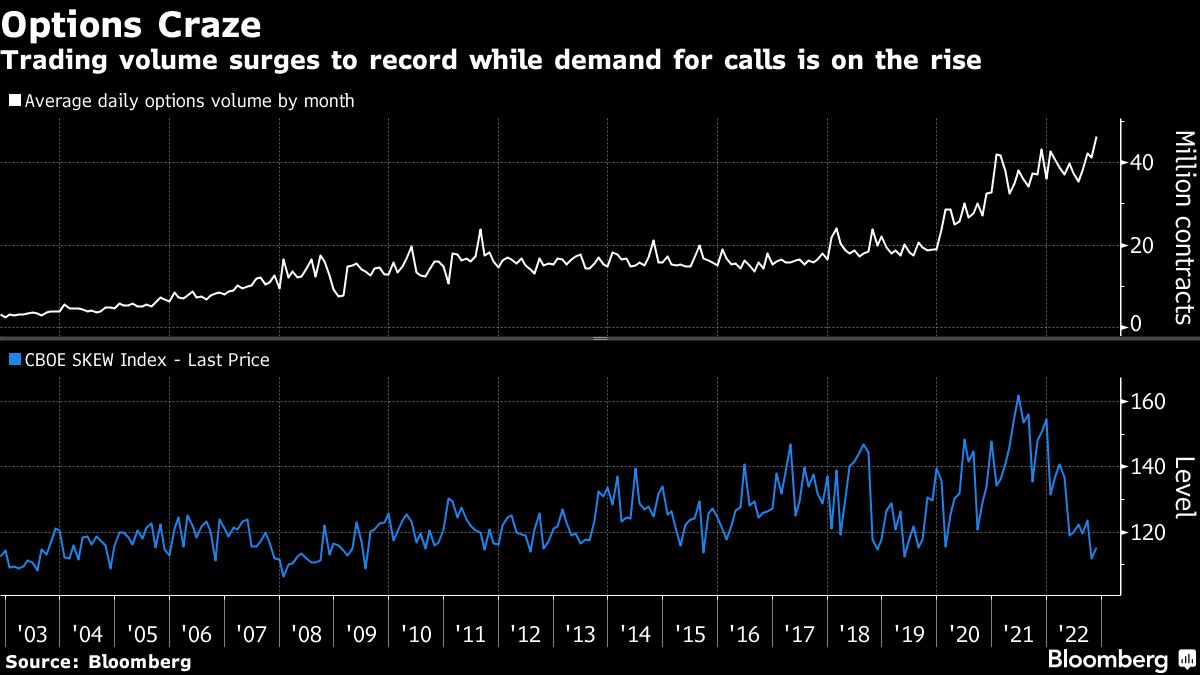 (Bloomberg) — Being glued to crypto news this week meant missing adventures in regular markets that while lacking the same high drama, made up for it in terms of money at stake.

In case you missed it, stock and bond traders spent the last five days still caught in the thrall of an event that may be hard to recall for people mesmerized by the FTX.com collapse: Nov. 10’s inflation report, which ignited a short squeeze among traders expecting a worse number. Reverberations continued to be felt in terms of positioning, trading in derivatives and probably also in wrongly prepared portfolios.

As usual in 2022, the biggest venue of impact was the US stock options market, where trading volumes are smashing records as investors of all stripes rush into short-dated contracts to catch up. It’s creating snags for what had been billed as the great inflation trade, with the mighty dollar losing luster and technology shares reclaiming their long-lost leadership, at least briefly.

The recalibration was prompted when a soft print on consumer prices triggered a reset of the perceived path for Federal Reserve monetary policy. Exacerbating it are money managers who had cut equity exposure to the bone during the bear market and found themselves caught out. With almost everyone sitting on the same side of the trade and exiting at once, an already-turbulent market got weirder.

“Crypto is just part of a broader mosaic of an almost dysfunctional market,” Doug Fincher, hedge fund manager of Ionic Capital Management, said by phone. “Not to be cynical, but look at CPI last Thursday. It was two basis points better than expected, and the market exploded. There’s a massive amount of technical factor rotation. There’s just a lot of crosscurrents in a really volatile, strange market.”

The trend abated some during the week, with the S&P 500 closing lower over the period. Short-term Treasury yields regained some ground and the dollar edged higher as Fed officials reiterated their intention to keep raising rates.

Still, whether inflation has peaked is up for debate. There won’t be another reading for more than three weeks, and investors and policy makers alike have misjudged price trends since the pandemic hit. With data mostly coming in ahead of expectations this year, everyone from currency traders to bond investors were bracing for another big inflation number last week.

When it didn’t pan out, a cascade of unwinding ensued. The dollar, darling asset of the inflation trade, is losing momentum. Down more than 4% in November, the US currency is poised for its worst month in two years. Two-year Treasuries, where large speculators built up record short positions before the CPI report, saw a rally that pushed yields down 25 basis points when it was released, the most in more than a decade.

Tech stocks, among the biggest casualties during the Fed’s aggressive inflation-fighting campaign, got a respite. Up more than 9% since the day before the CPI data, the industry has beaten all other major groups in the S&P 500, in a partial reversal of dismal returns earlier this year.

“These things are certainly bound to happen at around key critical junctures in economic and monetary policy, which is where we’re at — the Fed shifting from raising rates toward more of a deceleration in terms of hikes,” said Layla Royer, a senior equity derivatives salesperson at Citadel Securities. “It is a significant shift.”

A basket of the most-shorted stocks soared 18% over the four days through Tuesday, dealing a fresh blow to hedge funds who boosted bearish wagers during a 10-month rout and turning them into forced buyers. Their total short covering over the stretch hit levels not seen since the retail-driven squeeze in January 2021, data compiled by JPMorgan Chase & Co.’s prime broker show.

For a third time this year, the S&P 500 mounted a recovery of more than 10%. Such counter-trend rallies have spurred demand for bullish call options from those who have been defensively positioned in the market. As a result, the index’s skew — the relative cost of puts versus calls — this month fell to the lowest level in more than a decade.

“Market screams back up. You’re at risk of losing your job because you’re going to underperform everybody,” said Dennis Davitt, founder of Millbank Dartmoor Portsmouth LLC, an investment firm that specializes in volatility strategies. “So the remedy for that is just by turning some of your equities into cash and then buying upside calls as a stock replacement.”

The Fed-induced market gyrations are encouraging investors to go all-in on options to place bullish and bearish bets alike. About 46 million contracts have changed hands each day in November, on course for the busiest month on record, data compiled by Bloomberg show.

Helping drive the boom is the frenzy trading in derivatives maturing within 24 hours. Such contracts made up a whopping 44% of S&P 500 options volume in the past month, according to an estimate by Goldman Sachs Group Inc.

For now, the fireworks following the CPI shock appeared to be dying down. The S&P 500 has moved less than 1% for six straight sessions on a closing basis, the longest stretch of calm since January.

To Mike Bailey, director of research at FBB Capital Partners, the tranquility may not last. For one, the cross-asset rally has contributed to easing financial conditions that’s working against Fed Chair Jerome Powell’s goal to slow the economy.

“We may get some buyer’s remorse over the next few weeks as investors fret over a potentially hot jobs number and any whiff of hawkishness from Powell and the Fed,” said Bailey. “Investors are coming up for air after a nice run since mid-October. The next question is, are we pricing in too much good news?”