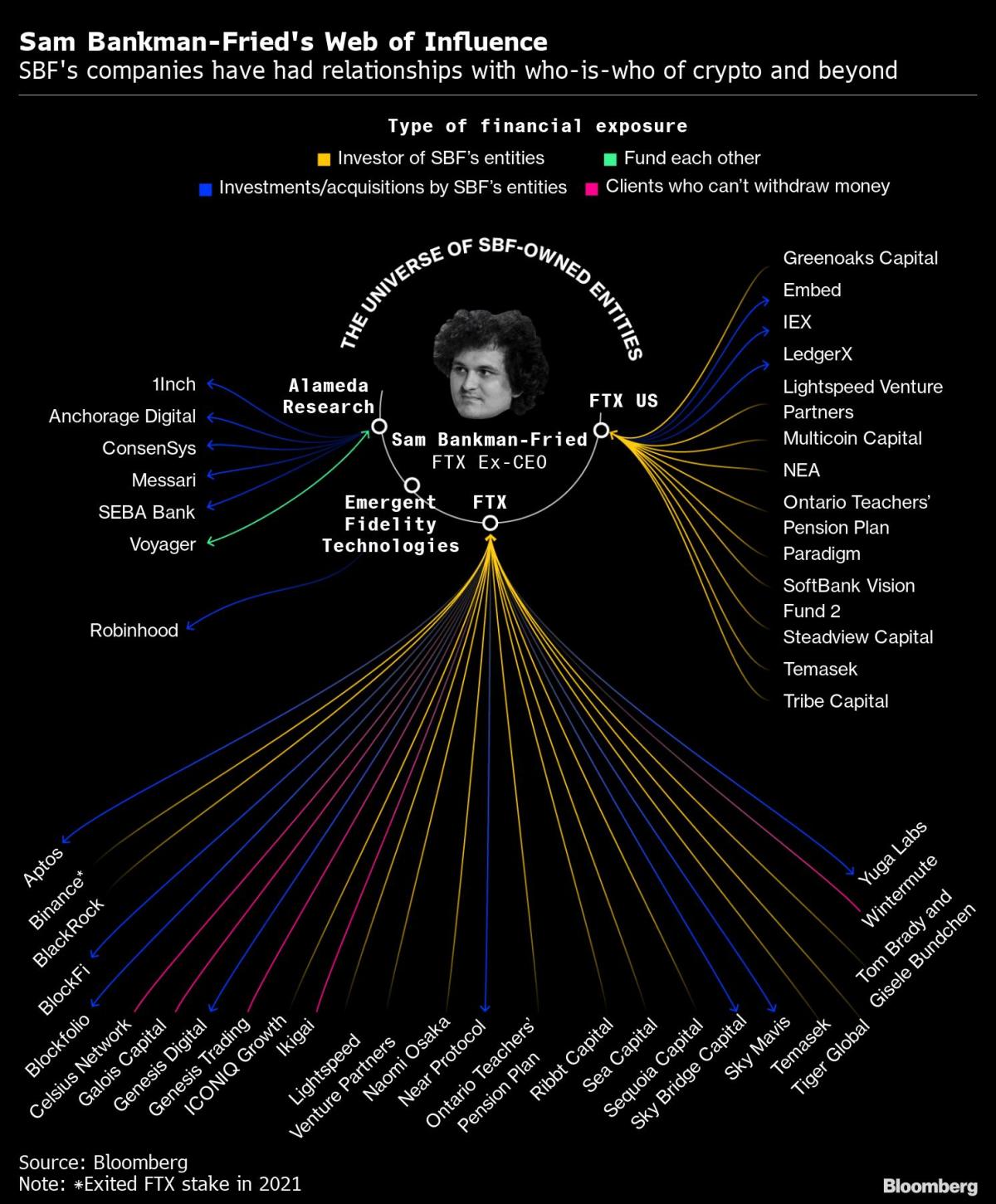 (Bloomberg) — Crypto brokerage Genesis warned of the risk of bankruptcy amid contagion from the rapid demise of Sam Bankman-Fried’s FTX empire.

Tampa Bay Buccaneers quarterback Tom Brady and the Golden State Warriors’ Steph Curry are among the celebrities that a Texas regulator is investigating for potential securities-law violations tied to their promotions of FTX.

The fall of Bankman-Fried’s businesses, including trading desk Alameda Research, is contributing to reduced liquidity in crypto markets.

Concerns about Genesis and other ailing crypto outfits, such as BlockFi Inc., are unnerving investors. A selloff in Bitcoin paused Tuesday but the token remains around the lowest level since November 2020.

An FTX Group bankruptcy filing showed that the fallen cryptocurrency exchange and a number of affiliates had a combined cash balance of $1.24 billion.

The latest tally as of Nov. 20 “identifies substantially higher cash balances than the debtors were in a position to substantiate as of Wednesday, Nov. 16,” according to the filing.

Bahamas court officials dropped their opposition to moving one piece of FTX’s restructuring case to a US court in Delaware, according to a court filing.

Liquidators appointed in the Bahamas for one FTX affiliate agreed to move a case they filed in New York to Delaware, where more than 100 units are under the oversight of a federal judge, FTX lawyers said in papers filed in US Bankruptcy Court in Wilmington, Delaware.

FalconX Says it Will Resume Use of Silvergate Payment Network (7:40 a.m. HK)

Uncertainty around cryptocurrency market conditions in the wake of FTX’s collapse and an outage that affected Silvergate’s “wire payment network” prompted the suspension, FalconX said Monday in a memo to clients. Since then, concerns have abated, San Francisco-based FalconX said.

A Texas regulator is scrutinizing payments received by celebrities to endorse FTX US, along with what disclosures were made and how accessible they were to retail investors

Tampa Bay Buccaneers quarterback Tom Brady and the Golden State Warriors’ Steph Curry are among the high-profile people being investigated.

Crypto markets continue to be under pressure on concern about the spreading fallout from the FTX crisis. Bitcoin wavered Tuesday, trading below $16,000 at around the lowest level since November 2020. A gauge of the top 100 digital assets has declined more than 70% over the past year.

Digital-asset brokerage Genesis is struggling to raise fresh cash for its lending unit, and it’s warning potential investors that it may need to file for bankruptcy if its efforts fail, according to people with knowledge of the matter.

Genesis, which has faced a liquidity crunch in the wake of crypto exchange FTX’s bankruptcy filing this month, has spent the past several days seeking at least $1 billion in fresh capital, the people said. That included talks over a potential investment from crypto exchange Binance, they said, but funding so far has failed to materialize.

US Prosecutors Opened Probe of FTX Months Before Its Collapse (4:14 p.m.)

Long before Sam Bankman-Fried’s FTX cryptocurrency empire collapsed this month, it already was on the radar of federal prosecutors in Manhattan.

The US Attorney’s Office for the Southern District of New York, led by Damian Williams, spent several months working on a sweeping examination of crypto currency platforms with US and offshore arms and had started poking into FTX’s massive exchange operations, according to people familiar with the investigation.

“The recent implosion of FTX, a cryptocurrency exchange, has made it abundantly clear the digital asset industry has serious problems,” the senators said in a letter to Fidelity CEO Abigail Johnson.

Bain & Co. was among consulting firms that helped conduct due diligence for Tiger Global Management’s investment in now-defunct crypto exchange FTX, according to people familiar with the matter.

Tiger Global, which pays Bain more than $100 million a year to research private companies, has now written down its $38 million FTX stake to zero, the people said. Sam Bankman-Fried’s oversight of a vast web of FTX-linked entities was one of the risks highlighted during the due-diligence process, but the money manager still believed it was a sound investment at the time, one of the people said.

Wall Street’s waning conviction in Coinbase Global Inc. has done little to deter Cathie Wood. Instead, she’s been scooping up shares of the struggling cryptocurrency exchange in the wake of the collapse of FTX.

Wood’s Ark Investment Management funds have bought more than 1.3 million shares of Coinbase since the start of November, worth about $56 million based on Monday’s trading price, according to data compiled by Bloomberg. The shopping spree, which started just as FTX’s demise began, has boosted Ark’s total holdings by roughly 19% to about 8.4 million shares. That equates to around 4.7% of Coinbase’s total outstanding shares.

The wipeout of Sam Bankman-Fried’s crypto empire, including its crown jewel FTX exchange and sister trading desk Alameda Research, is helping to reduce liquidity across the crypto market.

The decline has been dubbed the “Alameda Gap” by blockchain-data firm Kaiko, named for the trading group at the center of the storm which is closing its books. Plunges in liquidity usually come during periods of volatility as trading shops pull bids and asks from their order books to better regulate risks, Kaiko noted in a Nov. 17 newsletter.