Coinbase Debt Was ‘Canary in the Coal Mine’ for Crypto Meltdown 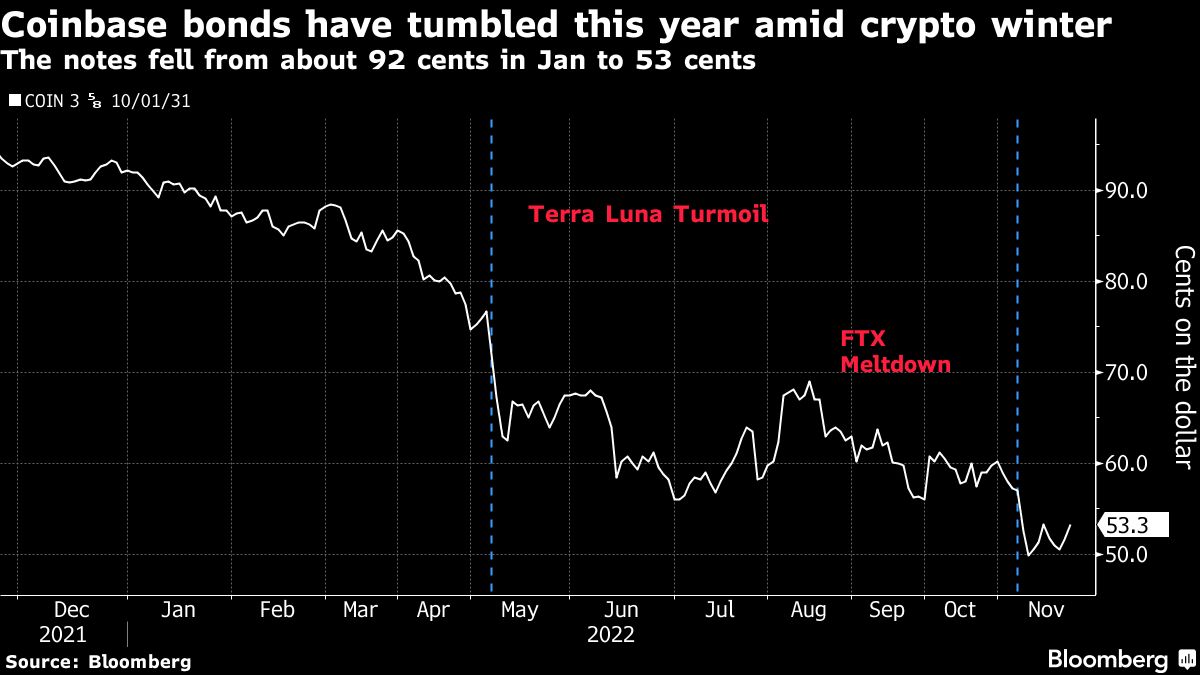 (Bloomberg) — In the wake of the spectacular meltdown of Sam Bankman-Fried’s crypto empire, many investors are looking for early warning signs that may have foretold the contagion that was about to unfold. One possibility? Coinbase Global Inc.’s junk bonds.

The largest US digital-asset trading platform has seen the price of its bonds plunge this year. In early January, the price for one of its most active notes was at about 92 cents. It then slid to about 77 cents in April before dropping to 63 cents amid the Terra Luna market crash in May. The bonds traded around 53 cents on the dollar — a level typically associated with distressed — in early morning trading in New York Wednesday, according to Trace bond trading data.

The drop is largely attributed to the so-called crypto winter that has leveled digital currency markets this year. But for some industry participants, the plunge was an omen of the carnage that would soon be unleashed.

The crypto exchange’s debt can be described as a “canary in the coal mine,” Bloomberg Intelligence credit analyst David Havens said in a phone interview. In particular, “something that really grabbed attention” back in May was Coinbase’s noting that clients could be treated as general unsecured creditors if the company went bankrupt.

This caught a lot of people by surprise and raised several questions, according to Havens: “Bankruptcy? What were they seeing, hearing, feeling that compelled the lawyers to include that statement at that time,” he said. And secondly: “Clients. Wait, what? We may be pari passu to bondholders, not segregated as we’d be at a regular exchange?”

At the time, Coinbase chief executive officer Brian Armstrong said the firm added the risk disclosure due to a new US Securities and Exchange Commission accounting requirement.

It contributed to the decline in the bonds and proved to be one of the indicators of what was to come.

The yield on Coinbase’s bonds is currently roughly between 13 and 15%. “We think this fully reflects ongoing crypto uncertainty and negative technicals, with few buyers willing to step in with what remains of 2022,” Havens wrote in a note Monday.

“The bonds are reflecting the animal spirits that are going on right now,” he said in the phone interview. “And that is the fear that has engulfed crypto.”

Any recovery in the debt, however, could be an early signal that the market is beginning to thaw, according to Havens. “But so far it’s been a painful ride,” he said. “We are sort of at a tipping point.”

There may be a path to positive returns for Coinbase bonds, according to Havens. He points out that the crypto exchange has $5.4 billion of liquidity and is actively engaged with regulators, differentiating it from other exchanges like Bankman-Fried’s FTX and Changpeng “CZ” Zhao’s Binance.

“Coinbase should be buying back every bond they possibly can at the moment to demonstrate their commitment to a reasonable balance sheet,” added John McClain, a high-yield portfolio manager at Brandywine Global Investment Management. “Leverage has destroyed many of their competitors and they have a unique opportunity to very attractively reduce leverage.”

Long-time high-yield bond analyst Marty Fridson also shares a more positive outlook on the beaten-down bonds. Fridson, who is chief investment officer at Lehmann Livian Fridson Advisors LLC, thinks that BB rated notes trading at distressed levels, including Coinbase, can be better described by their ratings tier than their current price, according to a Nov. 15 PitchBook analysis.

He notes that Coinbase’s debt is trading at distressed levels while still holding one of the highest ratings in speculative grade. Moody’s Investors Service reports just a 0.79% one-year default rate for Ba issuers for the period spanning 1970 to 2021, his analysis showed.

“By contrast, I estimate the one-year average default rate on distressed issuers over the period from 1997 to 2021 at 38%, suggesting a massive mismatch between a BB rating and a distressed valuation,” he wrote.

The yield on Coinbase’s bonds is currently much higher than the 7.1% average yield that debt with similar ratings is trading at. That too suggests a dislocation between the price the market is setting for the debt versus how solid a bet credit graders think it is.

To be sure, the market is still fragile. The fallout from FTX’s meltdown has already set off a wave of bankruptcies and it’s likely too soon to say which players will still be here when the dust settles.

Underwriting anything tied to crypto is tough — except maybe crypto firms with hard assets like mining rigs or other infrastructure — said Hunter Hayes, portfolio manager of the Intrepid Income Fund at Intrepid Capital Management.

“There’s no intrinsic value,” he explained. “It’s like Tinkerbell — if people don’t believe in crypto’s utility, it disappears.”

Bullish equity managers are already diving in to buy the dip. Cathie Wood’s Ark Investment Management funds have bought more than 1.3 million shares of Coinbase since the start of November, as FTX started to topple. Meanwhile, the debt has rallied off its record low set earlier this month.

Year-to-date, the shares have fallen more than 80%, while Bitcoin is down about 65%. As of Tuesday’s close, it was estimated the shares need a staggering 782% rally if they are to reach their average 12-month price target from the beginning of 2022.

General Electric Co. announced that about $9.3 billion of dollar-denominated bonds were validly tendered and not withdrawn at or before the early participation date as part of its recent buyback offer.

Borrowers piling into Europe’s debt market are selling bonds with the lowest average maturity in four years. Bonds sold this month by investment-grade issuers in the common currency have an average tenor of about 6.3 years, the lowest since December 2018.

Yield premiums on investment-grade bonds in Asia outside Japan widened for a third straight day Tuesday, according to data compiled by Bloomberg.

–With assistance from Yueqi Yang.