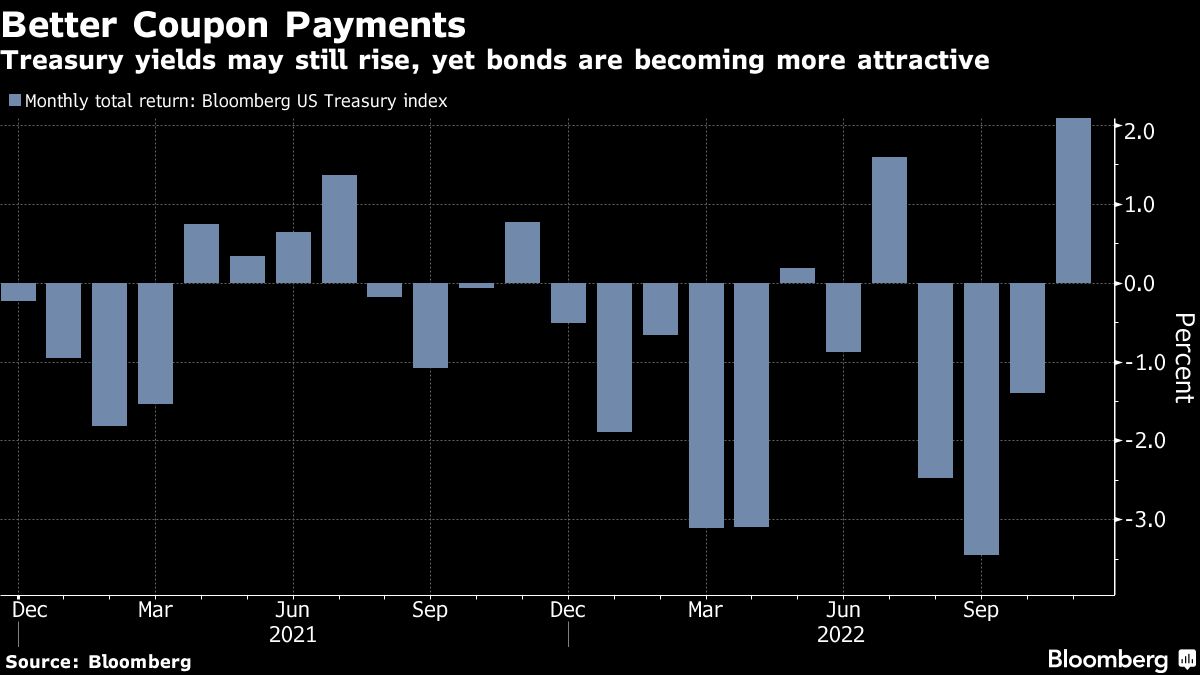 (Bloomberg) — Wall Street is finding a reason to keep plowing into the bond market, even with a Federal Reserve that’s still far from declaring victory in its war against inflation.

The selloff that hit investors with record-setting losses during the first 10 months of the year also brought a stark end to an era of rock-bottom interest payments on Treasuries by driving yields to the highest in over a decade.

Those coupon payments, now over 4% on recently issued 2-year and 10-year notes, have become large enough to lure in buyers and are seen as providing a buffer against future price declines. The resilience of the economy is also strengthening the case: If the Fed needs to tighten monetary policy so much that it sets off a recession, Treasuries will likely rally as investors seek somewhere to hide.

“The coupon is becoming a more meaningful source of return now,” said Jack McIntyre, a portfolio manager at Brandywine Global Investment Management. “The bond math is turning into a tailwind.”

The bond market gained support Wednesday when Fed Chair Jerome Powell indicated that the central bank its likely to slow the pace of its rate hikes at the Dec. 13-14 meeting.

The comments added fuel to a rally that began earlier in November after the rate of consumer-price inflation slowed. That sent a Bloomberg index of Treasuries to a more-than 2% gain for the month, the first advance since July and the biggest since March 2020, when the start of the Covid pandemic in the US spurred a rush into the safest assets.

Powell’s tempering of his hawkish tone boosted demand from investors seeking to lock in current yield levels or close out short bets against bonds.

The continued buying drove two-year Treasury yields from as high as 4.55% on Wednesday to as low as 4.18% early Friday, before yields edged up after a stronger-than-expected November jobs report. Further out the curve, 5- and 10-year yields continued to dip and are holding at the lowest levels since September.

McIntyre cautioned that the market’s volatile ride may not be over, saying signs of persistently high inflation could limit the scale of future rallies or push yields back up.

“While inflation is coming down, it’s got a long way to go,” he said. “We don’t know when and whether we need a meaningful recession to achieve that.”

But the reaction Friday in the face of still-rapid employment and wage growth shows the underlying support the market has gotten from the surge in rates over the past year. That’s steadily pushed up the coupon payments on the bonds the Treasury Department sells at auction.

“The trend of higher rates is definitely not going to go away overnight,” said Kathryn Kaminski, chief research strategist and portfolio manager at AlphaSimplex Group, whose public mutual fund is net-short fixed income and up more than 34% this year. “But we have seen volatility continually increasing throughout the year. So the relative strength of the bearish signal relative to volatility has become less strong.”

Moreover, there have been additional signs of weakening growth and easing inflationary pressures. The consumer price gauge targeted by the Fed rose at a slower-than-anticipated pace in October, a report out Thursday showed.

In the coming week, investors will watch data on the service economy, producer prices, and inflation expectations for further signs of how rate hikes are affecting the economy. Fed policy makers won’t be speaking ahead of the mid-December meeting, when the central bank will update its economic projections.

Expectations that tighter monetary policy will slow the economy have driven the longest-dated bonds to the biggest gains since early November, with 30-year yields falling again Friday. But short-dated securities have also advanced over the past month, highlighting the appeal of the higher coupon payments to investors looking to eke out a return until they mature.

“We do hear that advisers on the retail side are happy to put clients into a 4% yielding investment for the next two years,” said Scott Solomon, associate portfolio manager at T. Rowe Price.